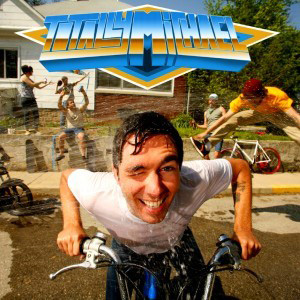 One-man band Totally Michael is like that little brother you love to hate who scratches all your CDs and giggles while doing it. And his self-titled debut is exactly the same, an epitomic collection of guilty pleasures.

From the feel-good vibrations of album opener “Summertime,” which instantly becomes an anthem for the season, to the sugary pop of “In Her Diary,” Totally Michael is full of memorable hooks that are absolutely impossible to get out of the brain. Barely banking in past the 30-minute mark, Totally Michael is straight to the point: perfect tunes for your 11-year-old cousin’s birthday pool parties full of fun, smile-inducing sing-alongs.

While Totally Michael is a lot more childlike, not childish, the themes are a bit redundant, especially the high school flashbacks of “Prom Night” and “Cheerleaders Vs. Drillteam,” where Michael pits the two popularity-chasing camps in a winner-take-all face off. But he makes up for it with the catchy and campy melodies of “Orchestral Interlude,” “Death Hill (Over and Over),” “Get With It Sierra” and “Slow Jam.”

Totally Michael – the second release of the little label that could, the influential, progressive tastemaker IHEARTCOMIX – now spearheads the sound of pop punk’s future. And the future looks good.