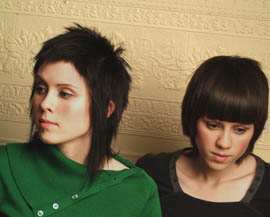 Sara Quin is looking for her vitamins as she relishes the relative comfort of her hotel room at a stop in the Canadian prairie city of Saskatoon. She and her sister Tegan are both fighting off colds and looking forward to getting a night’s rest somewhere other than on their tour bus.

Tegan and Sara are touring in support of what has to be called their "breakthrough" record, So Jealous, released last fall on Neil Young’s Vapor label. The Canadian duo’s refreshing take on alt-pop is garnering major airplay based on the strength of well written jangles such as "Take Me Anywhere" and the eerie "Walking with a Ghost." The girls craft songs that are intricate yet disarmingly unpretentious, the kind of music that is easy to quickly take as one’s own.

The So Jealous CD includes an enhanced portion that shows Tegan and Sara in the studio alternately bickering or hugging; in between they zing each other with clever one-liners in a dialog that would be the envy of any of the flock of today’s "hip" television programs. Each has had a lifetime of knowing just how far they can push or pull the other – they are identical twins. Sara laughs when the phenomenon of E.S.P. between twins is mentioned.

"I don’t think I’m any more telepathic with Tegan than I am with anyone. Certainly there’s a natural instinct that plays into our relationship just because we’re so close and we understand each other. I don’t know if it plays into our songwriting because we write independently, and we live in two different cities.

"When we were little kids people would ask us, ‘If I hit you, can your sister feel it?’ If I ever meet a twin who says they can feel it when their twin gets hit; I’ll hit them harder!"

Sara says that she and her sibling were very shy when they were little and didn’t indulge in very much of the mischief that lookalikes are known for. "I didn’t pretend that I was Tegan and go to her classes. I didn’t need any more school than I was already getting! We didn’t do any kinds of jokes or tricks or anything."

One of the most ear-catching songs on So Jealous is "Walking with a Ghost," a song that at first listen seems to be the tale of a frightening encounter in the shadows. A closer listen, however, reveals that the "ghost" is a little less harmful, merely the remnant memory of a love affair. That’s just fine with Sara, who would prefer to steer clear of any ectoplasm.

"As kids, when we had sleepovers we would challenge ourselves to sneak into the basement and see who was brave enough to do it. You were always convinced that there was some sort of ghost in the basement. We were just playing in Victoria, British Columbia, and we were in this beautiful old vaudeville theater, and the crew was telling me that there was a spirit, a ghost that people see in the theater all the time. I don’t like that! That’s creepy! I’m not totally unbelieving, I’m just not one who has a story to tell."

So Jealous is in stores now. Tegan and Sara will be playing March 24 at the Glass House, in Pomona, and May 1 at the Coachella Valley Music and Arts Festival, in Indio. For more information, visit www.teganandsara.com.