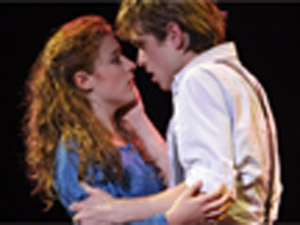 Dreaming of a trip to New York? In these uncertain economic times, a vacation is beginning to feel like a curious relic from the past, like VHS and independent bookstores.

Why not spend an evening downtown; see a show and go out to a nice dinner? While not as decadent as a trip, a night on the town can fulfill some of our collective need for luxury and escape.

Stuffed and content after eating at Peté’s Cafe, the second part of my faux New York experience continued with the unbelievably great show, “Spring Awakening.” A breakout hit on Broadway in 2006, the musical went on to win eight Tony Awards, including Best Musical.

Based on a 19th century German play by Frank Wedekind about teenagers struggling with their burgeoning sexuality and desire, the angst of the characters, rather than feeling dated, manages to convey an urgency and passion that still resonates today. In fact, the nudity and sexual content of “Spring Awakening,” unusual for Broadway and mainstream musicals, thrills and pushes the envelope a bit without devolving into distasteful exploitation.

The young actors, especially Christy Altomare, Blake Bashoff and Kyle Riabko, as the naïve and lusty leads: Wendla, Moritz and Melchoir, manage to convey their characters’ burning desires in such a way that they seem to be bursting out of their own skin.

The modern rock score, by Steven Sater and Duncan Sheik, proves instantly memorable and catchy. The opening song, “Mama Who Bore Me,” captivated the audience immediately.

Consistently original and entertaining from the gorgeous set to the inspired direction by Michael Mayer, “Spring Awakening” is fresh and riveting throughout. It breathes new life into the somewhat tired musical formula while still respecting the conventions of the format; High School Musical without the syrup, cheese or cringe factor.