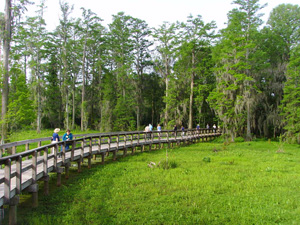 “I feel good!” It’s easy enough to have that sentiment when you’re in Georgia. But those three words are especially appropriate now that the Augusta Museum of History has opened an exhibit honoring the singer who famously shouted those words thousands of times, James Brown.

Brown was raised in Augusta, and the exhibit, entitled The Godfather of Soul, Mr. James Brown, is a comprehensive look at the life and career of a favorite local son. The museum has all kinds of memorabilia, including lots of stage clothing worn by Brown, most notably the “crown” the self-professed King of Soul wore for a time in the 1950s.

Brown died in 2006, and the exhibit is scheduled to run through May 2011. Brown suffered through many rough patches in his career, but once you walk into the exhibit, past the faux marquee that brightly bears his name, it’s nothing but a celebration.

Georgia has produced countless singers and musicians of note, and its many musical hotbeds are well known. Those who are making their first visit to the state, though, might be very surprised at all the other homegrown fun Georgia has to offer.

The trip from Augusta to Atlanta by car only takes a couple of hours if you take the freeway, but a few short detours along the way steer you from the superstores and golden arches and into “genuine” Georgia. Augusta itself holds dozens of interesting sites; the Lucy Craft Laney Museum of Black History is here, and it’s set up right in the house that the influential educator lived in.

The boyhood home of President Woodrow Wilson is furnished with original Wilson family pieces from the 1860s, and if you look closely at a particular pane of glass you can see where the future president left his mark – the youngster used his mother’s diamond ring to scratch his name into the window.

Downtown Augusta is filled with blocks of locally-owned stores and a particularly good time to drop in on shops like Blue Magnolia and Cloud Nine is during the monthly First Friday festivities. Street performers and additional vendors make the Broad Street scene come alive on the evening of the first Friday of the month, and right in the middle of it all, once again, is James Brown.

A statue honoring the musician is in the median of Broad Street between Eighth and Ninth Streets. On the way out of Augusta is the Phinizy Swamp. In this beautiful protected area you can walk through portions of the swamp on an elevated boardwalk from which you might spot egrets, herons, otters and alligators.

Just a couple miles off I-20 as you leave Augusta headed to Atlanta is the small city of Thomson. The area is associated with blues musician Blind Willie McTell and Thomson hosts the Blind Willie Blues Festival every August.

McTell’s grave and a historic marker honoring the bluesman are nearby as well. Hickory Hill is a major attraction in Thomson; it’s a Greek Revival-style mansion that was once home to Senator Thomas E. Watson. Tours of the mansion are offered hourly. At lunchtime, stop by Poppa’s Finest Bar-B-Que, and if it’s evening you might want to ask around to find out where local roots music act Crosstie Walkers are playing.

A bit further down the highway, turn off at the Greensboro exit and head to the Genuine Georgia artisan marketplace. Here you’ll find artists at work in their studios making pottery, metal art, jewelry, basketry, fiber art and a lot more.

Hot glass artist Loretta Eby is in residence here and you can watch as she turns lumps of molten glass into colorful art treasures. Of course, all the artists have their work offered for sale.

There’s still one more stop before you hit the big city of Atlanta though, and you should go there hungry. It’s the famous Blue Willow Inn in Social Circle where the buffet of Southern delights, including fried green tomatoes, is unparalleled and unending. Oh yes, I feel good!