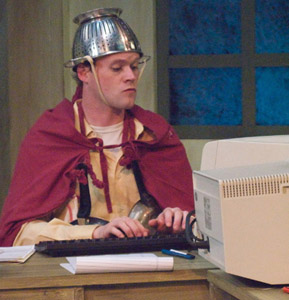 When bookish Arthur Quick (Isaac Wade) suffers a nervous breakdown at his mind-numbingly boring job, he transforms into a Don Quixote wannabe in Kit Steinkellner’s “Quixotic.” The Knight of the Sorrowful Countenance reports for duty at the insurance agency, festooned in a kitchen-concocted armor of pots and pans.

Obviously, hilarity ensues until a menacing temp, Carson (Paige White) can’t take it anymore. She is passed over for a permanent position while Quick keeps his job. The Manpower Maneater attempts to break her rival from his lunacy and, in exchange, becomes crazier than the nutty knight. It’s office politics at its sickest and most depraved, gently pushing the willing suspension of disbelief.

Steinkellner’s dialogue sizzles, but it’s the dynamos of the Los Angeles Theatre Ensemble who light up the Powerhouse. Wade and White’s performances make “Quixotic” burst with energy.