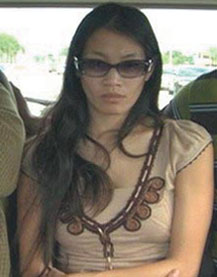 Adrian (Adrian Martinez) is a snake-loving, fuzzy-haired bear of a man who works as a doorman in Queens, and director Andrew (Andrew Gurland) gladly agrees to fund his search for a mail-order wife if he can make an exclusive fly-on-the wall documentary about it.

The painfully shy and very pretty Lichi (Eugenia Yuan) duly arrives and she and Adrian are married, but Andrew is disturbed that she gets treated little better than a domestic slave. Then, when Adrian organizes a sterilization operation, Andrew confronts Adrian about it and the whole documentary grinds to a halt.

Months later, Lichi turns up at Andrew’s house with a home video Adrian made her “star” in, and Andrew gets more involved with his subject matter than an objective documentarian should – he first asks her to move in, then ends up dumping his girlfriend and marrying her.

Things get more complicated from there on in, and it emerges that Lichi is not quite what we thought she was – an obsession with buying pigs and a desire for a baby are the least of her traits. Adrian and Andrew reluctantly team up to devise an elaborate plan to confront her in Miami, using the soundman’s (Huck Botko) loopy father as a decoy.

Although Mail Order Wife does have some funny moments, especially when the film crew and Adrian fly to Miami, it’s not very convincing as a dark comedy. The initial premise is altogether too potentially disturbing to make this tone work throughout, and when you realize that the documentary “feel” is far too polished, yet you’re not quite in mockumentary land, it becomes a rather unfulfilling experience. The cast works hard at deadpanning, and there is a great dark comedy to be made about this subject – but this film isn’t it.