Milk: Before Proposition 8, there was Harvey. 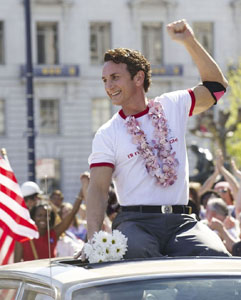 In the late 1970s, a man by the name of Harvey Milk took to the streets of San Francisco and sought to raise awareness within the gay community by organizing locals to fight the power against the city’s then-conservative government. Milk ran for and won the position of City Supervisor, becoming the nation’s first-known openly gay man to hold elected office.

Still, for all of his heroics on the political scene, Milk’s life was not without its setbacks. He lived the majority of his adult years in the closet. Working in New York City’s financial district, Milk was forced – like so many others – to love secretly and socialize with fear of discovery by his colleagues and clients.

His relationship with Scott Smith (the man who would become his first campaign manager) buckled under the pressures of numerous political runs. Another tumultuous partnership with lover Jack Lira ended in tragedy during the apex of Milk’s political career.

Although he exacted a number of policies and regulations that are still going strong today (such as various programs for seniors as well as a law that would force owners to clean up after their pets), Milk was struck down in his prime by fellow city supervisor, Dan White. He shot Milk and then-mayor George Moscone following an unsuccessful bid to win back his job following his abrupt resignation.

Bringing this historic tale of California government and social advocacy to the big screen is a varied mix of Hollywood’s elite.

Actor-director Sean Penn takes the title role. As Milk, he embeds himself into the fabric of his onscreen counterpart, adopting every nuance of the late political activist.

Playing his campaign manager and one-time partner, Smith, is James Franco. Actor Emile Hirsch, who worked with Penn on another biopic, Into the Wild, portrays Cleve Jones, Milk’s protégé and the man who, years later, would help spearhead the creation of the world-famous AIDS quilt. Diego Luna (Y tu mamá también) is Lira.

Alison Pill (Pieces of April) stars as the lone female of the group, Anne Kronenberg – who took over Milk’s campaign when Smith bowed out, leading ultimately to the candidate’s first victory within his district.

And cast as White is actor Josh Brolin. Brolin is not averse to playing controversial characters. He recently took on the role of George W. Bush in the film, W. However, there is a world of difference between subject and actor, particularly where the role of White is concerned.

“I don’t like any discrimination of anybody,” proclaims Brolin, adding that one of the most important fixtures in society should be, “the allowance of diversity in people’s lives.”

The team behind the camera is equally celebrated. Director Gus Van Sant has built a wildly loyal following since his early films like Mala Noche, Drugstore Cowboy and My Own Private Idaho. Many of his projects chronicle the plight of homosexuals in the United States and abroad with an empathetic and multi-dimensional view.

“Harvey’s message is still a potent one,” he says.

Openly gay himself, Black worked tirelessly, splitting his time as a writer on the HBO’s series “Big Love” and the script for Milk. Ultimately, his hard work paid off. Numerous portions of San Francisco were even made available to filmmakers for the purposes of shooting.

Although some of the people behind the story were not available as inspiration to the actors portraying them (Smith succumbed to an AIDS-related disease; Lira to suicide), Jones and Kronenberg were two members of the team who were readily on tap for their young counterparts.

Jones expressed his excitement about being brought to life by Hirsch.

“The prettiest boy ever is playing me!” jokes Jones, when asked what the activist’s thoughts were on the choice.

As for the intimate scenes within the movie, the cast members (many of whom weren’t even born during the years Milk was alive) are quite candid about their thoughts on gay relationships. Franco speaks openly about his upbringing; about having a “stereotypical [young man’s] view” toward homosexuality. However, that perception soon changed.

“I guess after I moved to L.A., it sort of went away,” says Franco.

Luna, who is heterosexual and married with a son, has had intimate scenes in movies with men in the past (he shared a kiss with Gael García Bernal in Y tu mamá también). Despite his Mexican heritage, which carries with it a certain image of machismo, Luna was not the least bit fazed about his sex scenes with Penn.

“It’s easy when they pay you, you know?” he says, with a chuckle.

Although the recent passing of Proposition 8 (the initiative to nullify gay marriage rights in California) may be a setback to many in the GLBT community, the open-mindedness of this young cast is proof positive that at least some progress has been made and that Milk’s hard work was not in vain.

Milk was an eloquent speaker. He was an optimist. He inspired. He amused. He was a rock star. He led those who had no hope and gave a face to a once-anonymous lifestyle.

In the decades following his assassination, his closest remaining confidantes will still tell you that the world has lost a true crusader. But it’s the city of San Francisco that will tell you that it lost a dear friend.