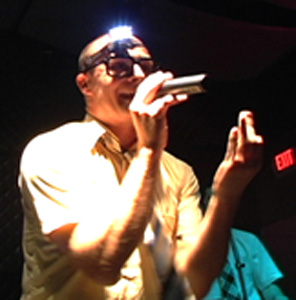 When the godfather of nerdcore, MC Frontalot, booked his first cross country tour – that ran from his native New Jersey and ending at a gamer convention in Seattle – director/producer/comedienne Negin Farsad and her team knew they had to tag along. The resulting documentary, Nerdcore Rising, is a unique look into the niche subculture of geeksta rap and the hacking, gaming, blogging, Star Wars-obsessed fans that love it. And in honor of its recent DVD release, the movie has embarked on its own cross country road show with a stop at the Engineering Cinémathèque in Hollywood this weekend.

Although MC Frontalot is considered the genre’s rapper de la resistance, he is now one of hundreds of self-proclaimed nerds who – through “sizzling beats” and hip-hop ethos-rap about lasers, HTML and dextromethorphan to other hysterical computer know-it-alls.

The movie puts a spotlight on the musical prowess of the tragically uncool and gives insight and legitimacy to the phenomenon with interviews from celebrity music nerds and hip-hop stalwarts while never straying from the inherent hilarity of a hardcore-nerdy, white rapper traveling the country with his slightly dysfunctional band family.

Wear your handmade storm trooper outfit and get your questions ready because the filmmakers will be on hand for both screenings. RSVP at nerdcorerisingLA@gmail.com for tickets.