Kraak & Smaak: Getting to Know the Dutch Trio 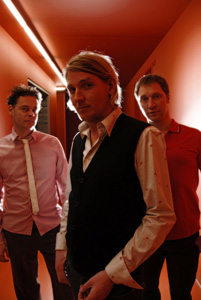 If you listen to the radio, watch television, or visit PerezHilton.com there is a strong possibility you’ve heard the funktified disco-delicious grooves of Kraak & Smaak. The Dutch trio’s current single, “Squeeze Me,” is commanding KCRW’s airwaves and is featured in the latest Rhapsody commercial.

The success of “Squeeze Me,” from their newly released album, Plastic People, has rocketed Kraak & Smaak to the No. 1 spot in Holland and the UK. The trio is still below the mainstream radar here in the states, though their ageless, genre-bending music deserves everyone’s attention.

First off, where did the name come from?

(Laughs) We get that a lot, it’s not what you think it means. It actually comes from a Dutch proverb. In English it would translate into something like “crunchy-tasty.”

How would you describe your sound to someone who has never heard your music?

A mix of dance music, with ingredients like jazz, funk, breakbeats, hip-hop and house. It’s eclectic but also really raw and funky.

Who were your main influences growing up?

A lot of disco and a lot of funk – the usual names, like James Brown and Sly Stone. Funk and disco and jazz are the main influences and a lot of hip-hop and house.

Who are you listening to now?

What made you start playing as a live band?

That was because we made an album. We were just DJing and producing, then somebody came up with the idea, ‘you have an album now, maybe you should start promoting it. And instead of DJing, you could play as a live band.’

We called a couple of guys we knew in Holland – an MC, a singer, a drummer and bass player – and started jamming. It started as nothing really, we played just songs on the album and it grew and grew.

What should people expect from your shows?

They can expect a very energetic live show with singers and musicians and a lot of funk and energy. Also, a lot of different styles of music, with a good flow to it.

Will you be playing any of your remixes live, or will it be strictly album material?

We’re playing a remix of “Squeeze Me,” and we are playing a new version of our remix “Wait a Minute” by a guy called Lack of Afro. Maybe in the future we’ll do more of the remix album stuff, but I think most of the people know the first album and the second album, so we try to play as much as we can from them.

Is it pretty strange playing here in the states at smaller venues, whereas back home in Holland you’re No. 1?

Yes and no. The venues are slightly smaller, but you play in legendary clubs. It doesn’t matter whether you’re playing for like 100 or 5,000, people react the same every time.

So you’re touring the states now and you just remixed Junkie XL and Sam Sparro. What’s next?

Finishing up this tour for the next four weeks, then we go back to Holland. By the end of the year we will play the four main clubs in Holland. January and February, we go back to the studio to do some new remixes and maybe work on a new album; we have some new songs already.