Island of Ice: Chilllin' Out in Greenland 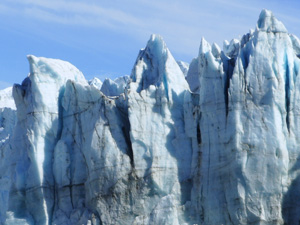 The phrase “island getaway” usually conjures visions of sunny beaches, skimpy bathing suits and maybe a parrot squawking in a palm tree. But adjust your thinking a little and you can have just as much fun replacing those things with icebergs, a sweater and a big hairy musk ox! Once you’ve visited Greenland, the world’s largest island, you’ll truly know the meaning of “chillin’ out!”

The parts of Greenland that are not completely covered in ice, only about 20 percent of the island, are all on its coastline. International flights arrive at Kangerlussuaq, a former American air base slightly inland on the west side of the country, and the closest place to the airport to see ice is at the nearby Russell Glacier.

The road to the glacier is passable only in a heavy-duty, four-wheel drive tour vehicle, and there are a couple of stops along the way: one to look at the remains of an Air Force plane that crashed long ago and one to have a look at musk oxen that hang out in the area. The last stretch of the road to the glacier isn’t a road at all, just a path that rollercoasters through a sandy area that ends very near the glacier’s edge, where you can witness the massive frozen river in “action.”

Run-off from the glacier feeds a constantly running stream, and standing on one bank, you can watch huge chunks of ice crash into the water on the other side. The glacier gives a quick warning when its about to “calve”– a loud report like a rifle being fired into the air indicates a piece is going to come thundering down at any second.

The glacier is always moving and settling, so you’ll hear subtle cracking and popping noises throughout your visit. And this beautiful glimpse of the cool side of Mother Nature is just the beginning of any icy Greenland exploration!

Ilulissat is a village on Greenland’s west coast that lies above the Arctic Circle, and it’s the most scenic spot from which to launch an expedition into some serious ice. The only way you can get to Ilulissat from Kangerlussuaq is on an Air Greenland flight since the rugged terrain prevents the building of roads between settlements anywhere on the island.

Your flight will give ample proof of that situation as the small plane flies low enough for you to see the undulating rock hills interspersed with frozen lakes and icy fiords. Those fiords are where all the icebergs around Ilulissat come from; they provide a steady supply of the behemoths that eventually float out to open sea.

There are a couple of options available to get close to the bergs; one tour cruises alongside the frozen chunks as they line up for their ocean journey while the other goes very close to the mouth of the fiord where the icebergs are everywhere. The ship captains are very experienced, and they cruise as close to the ice-mountains as safety allows; at times it seems that you can reach out and touch one of the giants.

The fiords, of course, are not the original source of the icebergs; that would be the place where all the glaciers fuse together, the massive Greenland ice cap! And that’s the perfect way to “cap” off a trip to Greenland, with a helicopter ride to the endless ice field.

The chopper leaves Ilulissat airport and is soon over the fiords and frozen lakes, but its ultimate destination is a small rocky outcrop of land that juts out of the ice cap. The copter sets down on the tiny outpost, the only point for miles around that is not completely encased in ice.

There is nothing but ice for as far as you can see in any direction. In some places it is more than a mile thick!