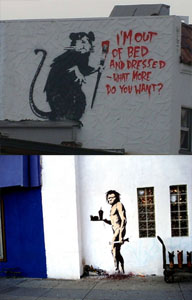 *This is the fourth in a multi-part series presenting excerpts from the above-mentioned Field Guide.

Description: Banksys are currently listed as an endangered species, resulting in skyrocketing prices on the black market – and groups who want to insure their protection from ivory paintbrushes. Stencils and wit (and often rats) combine in this creature that initially appears carnivorous, but is actually quite pacific: anti-war, consumerism and fascism. Only thing not anti- is irony.

Call: “All artists are prepared to suffer for their work, but why are so few prepared to learn to draw?”

Range: The most evasive species of the Urban Art Family, no one has ever actually spotted the Queen Banksy, only its offspring. Widespread in London, Banksys are rare in Los Angeles, but as of this guide’s publication, a Banksy Rat can be observed above 6910 Melrose Avenue and a Banksy Caveman holding a fast food tray stalks visitors at 7165 Beverly Boulevard.