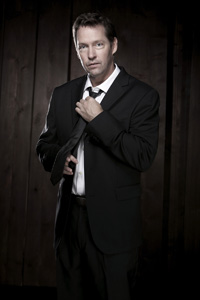 For some, he will always be the hockey player-turned-figure skating Olympian in The Cutting Edge. Others remember him as Shoeless Joe Jackson in Eight Men Out or the alien abducted logger that has needles poked into his eyes in Fire in the Sky. But D.B. Sweeney thinks of himself as a regular guy, one you could grab a beer with and maybe some wings at Hooters.

His new film, Two Tickets to Paradise, follows high school buddies whose glory days have passed them by. When they win two tickets to a championship football game in Florida, they decide it’s time to leave their stale lives behind … even if only for the weekend.

As the film’s writer, producer, director and star, Sweeney set out to create an ode to his Long Island roots.

“In Hollywood, there’s a lot of condescension to people who don’t live in New York or L.A.,” Sweeney explains, which is why he set out to make a film for the people he grew up with. “I thought guys like that could use a movie about themselves.”

But why tackle so many roles, one must wonder?

“I just wanted to get the film done,” he chuckles, “and this was the only way that could happen.”

In retrospect, the one role he wishes he’d handed over to someone else was as the film’s financier.

“Putting my own money in wasn’t a mistake, but it was a little rash,” he confides. “If I had it to do over again, I would’ve found more people with dispensable cash. The money I put in wasn’t dispensable to me. It was everything I had.”

Although, he admits, with guts comes glory.

“No one dreams of making a basket in the first quarter. All fantasies come from two strikes, two outs in the bottom of the ninth.”

Two Tickets to Paradise premieres on Showtime in December.