Drop Dead Gorgeous: This film dares to put fashion in its place 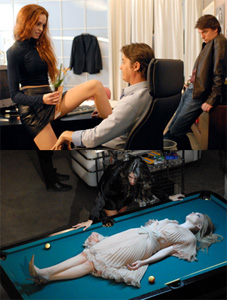 The world is obsessed with fashion. For decades, style rags have cluttered many a city girl’s studio apartment. “America’s Next Top Model” and “Project Runway” give a reality TV spin on this glamorous (and sometimes ugly) industry. Yet, few people have truly been able to depict the names and faces of this largely shrouded world with the sarcasm and laugh-heavy finger pointing it so deserves.

Enter: Andrew Hunt. This gifted young producer is at the head of a new dark comedy called Drop Dead Gorgeous. And he brings one of the top names spawned from fashion’s silky breast with him: director Philip Alderton.

Alderton is a premiere fashion, commercial and celebrity photographer. His penchant for beautiful composition might appear in stark contrast to the high wheeling and dealing of Hollywood, but for him, it was a passion project.

I arrive on the set of Drop Dead Gorgeous one day before the film wrapped production in Los Angeles. The project’s satirical story centers around a wildly diverse crew of fashion industry players and victims. For all the humor audiences can expect to see onscreen, nothing could have prepared me for the righteous belly laughs I’d get from the cast.

I sat down next to cinematographer Zoran Hochstätter (The Return of Swamp Thing). He’s a bear of a guy with a mane of white hair and a gloriously thick accent. Within seconds, his infectious breakdown of the film’s look and praise for Alderton’s directorial style is evident.

Moments into my interview with Hochstätter, Australian actor Vernon Wells makes his way over. Wells built an impressive career in Hollywood during the 1980s with roles in the Arnold Schwarzenegger vehicle Commando and Mad Max 2 with Mel Gibson.

With his strong, tall stature, the guy can be a little intimidating at first. But in no time, he had me in hysterics.

Gorgeous stars Jeremy London (Mallrats) as modeling agent, Robert Baker. Within the movie, his small-time home base and star talent become part of a mockumentary. Most of the film is shot in what has become known as the “MTV style” – steadicam videography juxtaposed against the fantastically bizarre behavior of showbiz wannabes.

Hunky actor Nicholas Irons (The Madness of King George) makes his way over to the group. For the next 30 minutes he and Wells exchange barbs with Alderton like old drinking buddies. But first chance he gets to play up his boss, Irons rises to the occasion.

“Some directors come with a very clear vision of what they want to see,” explains Irons. “And Philip always knows exactly what he wants.”

The feeling is mutual for London, who was handpicked by his director for the starring role. He’s so smitten by the experience of working with the Aussie auteur that he’d have another go with him in a heartbeat.

“This is probably my favorite character I’ve ever played,” confesses London.

And as for all the luscious, leggy ladies who will undoubtedly be at the center of the film’s drama and outlandish happenings, Alderton promises the real deal.

“Most of the girls are model-actresses,” he says.

After the final touches are placed on the project, it will sashay its way into theaters – and with fingers crossed – onto the favorites lists of movie buffs everywhere.

Special Features
Secret screenings. Redacted scripts. How they make the twists in ‘This Is Us’
105 views

Special Features
Virtually every film coming out this fall
731 views