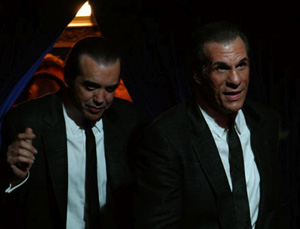 Produced, written and directed by Robert Davi, The Dukes follows a famous ’60s Doo Wop group that’s fallen from the spotlight. Being reduced to singing for commercials and in fear of losing his family, Danny, the Dukes’ frontman, played by Davi (An American Carol, The Butcher) plans a heist with his even more desperate friends.

Winner of Best Director and Special Jury awards from various film festivals including Monte Carlo Comedy Film Festival and Queens Film Festival, The Dukes, which is Davi’s first directorial debut, has been received with open arms in national and international arenas.

Although it’s praised as a comedy, one cannot but find the movie lacking any humor, or drama for that matter. The slow progression of the plot and characters’ lack of emotion leaves the movie wanting character and flair. The movie’s storyline creates a world in which there are no consequences for one’s actions, and if anything, criminals are rewarded and applauded.