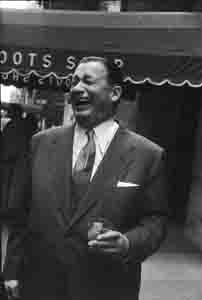 If God had asked Toots Shor what he would have wanted to be in life, his response would surely have been, “What are you kidding? A saloon keeper.” And saloon keeper he was.

From presidents and ballplayers to journalists and mobsters, Toots befriended everyone who walked through the door of his saloon and welcomed them wholeheartedly as family. In Toots’ life, friends came a very close second to family, and in fact, they were so close, he said the difference would come down to a photo finish.

The welcoming and genuine demeanor that Toots embodied led him to become the quintessential self-made man and an iconic figure in New York City history. From his hard knock youth in South Philadelphia, where his mother encouraged him to fight, to his glory years on West 51st Street, Toots flourished with his ability to woo stars and deeply touch people.

This documentary presents an authentic look into the life of a mystic who truly believed that bartenders make the best shrinks. Depicting New York in its “Golden Years” when “it was a simpler time,” Toots reminisces the days of old and shares the story of a truly remarkable man who never let the troubles of life get in the way of a good party.