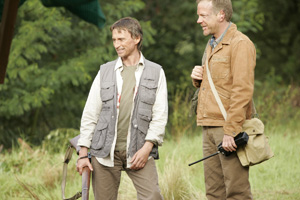 In this two-hour, feature-length “24” special, four years have passed since the season six finale, and Jack Bauer (Kiefer Sutherland) is in Africa working at a boys school with a military chum, Carl Benton. Drama ensues as rebels in the fictitious African village attempt to kidnap Benton’s students to be part of their army.

Back in the states, it’s the day of the Inauguration of President-Elect Allison Taylor (Cherry Jones), and as she makes her inspiring speech, Jack struggles to keep the children safe from harm.

The storyline is predictable – viewers always know what Jack will do when presented with ethical conundrums – and CTU regulars are missed, but “Redemption” features a few scenes with familiar faces – Tom Lennox (Peter MacNicol) and outgoing President Daniels (Powers Boothe) – while introducing characters that will undoubtedly be in season seven: President Taylor’s son, Roger, his girlfriend, Samantha, and a menacing baddie played by Jon Voight.