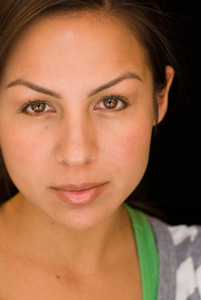 Mention the name Anjelah Johnson and most folks remember her as the streetwise Bon Qui Qui, a character she created as a regular on “MADtv” that went on to become a YouTube sensation. Though her stint on “MADtv” was only for one season, Johnson had achieved success before – as a stand-up comedian, actress, model and even an NFL cheerleader for the Oakland Raiders. Recently, she wrapped the filming of a new sitcom pilot for TBS opposite Valerie Bertinelli.

So what’s Johnson’s formula for choosing such a variety of roles?

“I’ll pray about it first and, you know, follow my heart with it as opposed to just jumping in and saying, ‘What’s this about?’,” she says.

On maintaining her belief system in an industry in which morals are easily bent, Johnson explains that she simply makes her stance known when necessary.

“Even with ‘MADtv’ I was kind of nervous because it’s late-night TV, it’s kind of edgy and I am not edgy, so I was thinking of doing things that I am not comfortable with so I brought those concerns up,” she relays, “and everyone was great. You say what you feel comfortable with and they work around it.”

Her methods of communication are obviously working for her.

“Everything is going amazing with me,” she says. “It’s truly crazy how well things are going. I just roll with the punches and take it day by day.”