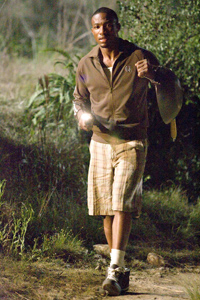 Arlen Escarpeta’s career has been on the right track for quite some time. He was Sam Walker on the hit TV show “American Dreams” and has had featured roles in films such as We Are Marshall and The Ten.

The next big splash on his horizon is the much-hyped, highly anticipated remake of the horror classic Friday the 13th.

“It is so exciting to be a part of something that has such a commercial buzz and is such a pop phenomenon,” Escarpeta says excitedly. “I was a little nervous at first, but once everyone was there and we were all on set and got to know each other and everything, it was cool. I feel like I left there with more friends than I came with.”

On what it’s really like behind the scenes of a slasher flick, Escarpeta says, “It was fun actually. We were laughing and joking and had a chance to act scared, but it was almost like a vacation after doing some more serious work I have done.”

Being careful not to give away any plotlines he recounts a prop malfunctioning during a very serious scene: “We were acting intensely scared in the moment and then you hear laughter in the background and we would all bust up. It was just a lot of fun.”

After the release of Friday the 13th Escarpeta has no less than three other feature films lined up.

“I am very lucky and blessed,” he says.