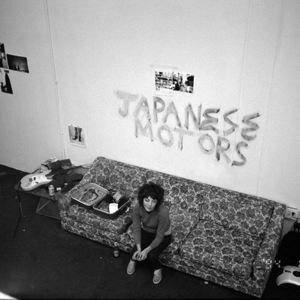 If you live in Southern California, you cannot avoid the formidable 405 freeway. It is a bleak, snake-like and dangerous conduit between Orange County and Los Angeles.

Haling from Costa Mesa, Japanese Motors obviously know this route well and give it homage with a reference as an almost friendly destination in the first song on their debut. “Single Fins & Safety Pins” will immediately grab a languid listener, give him some smelling salts and send him on his way a little happier than he was before the disc began.

Japanese Motors take a cue from Pavement in their chin-scratching, obtuse song titles and artful deadpan but ground themselves with a kind of buoyant back-to-basics song style and simple, spare production. With an upbeat aesthetic, the Motors manage to work in highlighted bass parts in ways that many an indie band overlook.

They have cultivated a twangy dual-guitar sound (I’m betting Fender), part Tom Verlaine, part Royal Trux and always economical. If their live show has the energy of this record, I would travel the 405 to see them.