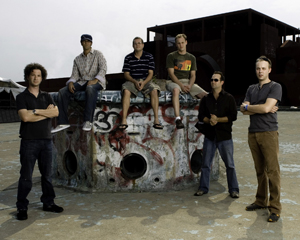 Los Difuntos burst onto the punk scene a couple of years ago when they released an EP called Born, Raised and Passed Away..., and now they’re back with a new, full-length album titled Los Difuntos. All of the songs on the album, mostly about the hardships of growing up in East L.A., were written by singer/guitarist Christian Torres, and many of the speedy numbers hit a psychobilly groove thanks to Austin Missett’s slapping on his upright bass.

The band is friends with Rancid, and that band’s Matt Freeman sings on the album’s lead track, “Lucy.” Los Difuntos has just dropped through Nickel and Dime Records, and a special version on colored vinyl is also available.

A Wished-For Song, Merri Cyr’s portrait of Jeff Buckley’s life and career, has been issued for the first time in paperback. Cyr was Buckley’s close friend and was with him at every point in his short career with her camera in tow.

She literally documented his every move, and the book features hundreds of candid and intimate photos of the artist. The book also contains vignettes written by other close friends and band members, as well as remembrances penned by the likes of Bono, Elvis Costello, Jimmy Page and Eddie Vedder.

A Wished-For Song was previously released in hardback only and has been unavailable for many years. Buckley drowned in the Mississippi River in Memphis in 1997.

Relm Makes Spectacle of Himself

DJ Mike Relm has been staying very busy lately. He has a new album out called Spectacle, and he’s just participated in mtvU’s “Ahead of the Curve” promotion where he performed a scratch version of his single “Everytime” with Adrian Hartley of the Blue Man Group.

He’ll be on the Jingle Bell Rock tour with Metric in December; those shows will see part of their proceeds going to a local charity at each stop. Right now Relm is in the midst of a big tour with Bassnectar, STS9, Spearhead and Kraak & Smaak, and he’ll be working his magic at Henry Fonda Theater Nov. 21.

Nobody Likes a Bully

Fans of Katy Perry are in for a treat in the form of the new Sarah Hethcoat EP, Nobody Likes a Bully. Hethcoat’s music is infused with the same lovable sass as Perry’s, a quality on display in the effort’s opener, “I Hate You.” Fans of Alanis Morissette will also hear a familiar attitude in songs like “I Got You.”

While she’s relatively new as a recording artist, Hethcoat’s voice has been thrilling audiences for years – she’s appeared on stage in over 25 musicals and had her original songs appear on “The Hills.” Unless you’re a bully, you are welcome to attend Hethcoat’s show at the Roxy Nov, 22.

The new Umphrey’s McGee album, Mantis, won’t be out until Jan. 20. If you’re a fan of the band, though, you’ll want to place a pre-order so you’ll have access to lots of free bonus material.

Pre-order customers will be able to download all kinds of stuff from the Umphrey’s archives beginning the week of Mantis’ release including sound checks, odds and ends from studio jams, outtakes, rarities and songs recorded during Taper Appreciation Nights. Find all the details at umphreys.com/mantis.

Viking Invasion You can leave your horned helmet at home, but don’t miss Times New Viking when they hit the El Rey Nov. 25. They’ll be playing all of their new EP, Stay Awake.