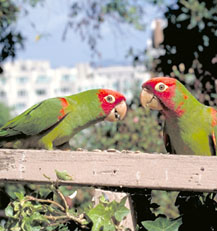 Within the opening minutes of the documentary The Wild Parrots of Telegraph Hill, bohemian Mark Bittner clearly states that he doesn’t own any of the illustrious parrots that he cares for. Yet as the film eventually exposes, his own life is undeniably owned by his relationship with these parrots.

Directed by Judy Irving, Wild Parrots provides an engrossing look at the unconventional relationship between a man and a flock of red-and-green parrots. Although the extraordinary and vivid footage of the parrots and their habitat is a focal point of the documentary, the intense observation of Bittner and his role is what lifts the film out of its potentially monotonous study of the parrots themselves.

Against the backdrop of the Telegraph Hill neighborhood in spectacular San Francisco, Bittner invites us to indulge in his bizarre lifestyle. Renowned around the nation as a caretaker of a wild flock of parrots in San Francisco Bittner (known also as “Birdman”) is a musician who migrated to San Francisco during the Grateful Dead heyday to become a professional rock ’n’ roller. Some time after he abandoned dreams of a professional music career, he became involved in tending to a flock of parrots as a way of preserving his “freedom to move.”

Bittner at first appears to be a bum – living off free rent, avoiding the workforce and refusing to cut his long hair until he gets a girlfriend – but his entanglement with the parrots mixed with his quixotic passion and compassion become the film’s force of intrigue. Irving’s precisely calculated questions to Bittner direct the movie toward a mode of contemplation, exposing the unique love between a man and his flock.

At the very least, Wild Parrots provides an intense education and study on this particular flock of unique parrots. However, the intense angle that Irving uses with her human subject propels the film above an ordinary nature documentary and establishes it as a love story … in more ways than one.