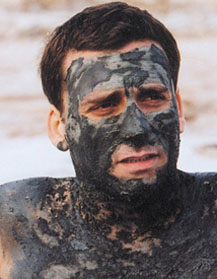 A film about historical conflicts and emotional healing, Walk on Water has too big an agenda for its 104-minute running time. Directed by Israeli filmmaker Eytan Fox and opening March 4, the drama follows Eyal, a cold-hearted Mossad agent (the handsome Lior Ashkenazi) who is assigned to assassinate the Nazi war criminal Alfred Himmelman.

Going undercover, Eyal poses as a tour guide for Axel (Knut Berger), Himmelman’s grandson who has come to Israel to visit his sister (Caroline Peters), a kibbutz-dwelling immigrant who has run from her family’s history. Eyal guides Axel through an adventure that becomes an intense learning experience for both men: Axel finds his grandfather is alive; Eyal learns Axel is gay; Axel – through Eyal’s casual slander and updates about suicide bombers – comes to understand the daily toil of the Arab-Israeli conflict; and Eyal reconnects with his emotions.

All the while, Eyal’s tour introduces the audience to the Dead Sea, Tel-Aviv, Jerusalem’s Wailing Wall and other historical hot spots – all of which act as a tip sheet for visiting Israel.

Under the auspices of addressing their differences (which they do over drinks and a scuffle where the pair defends three drag queens), Eyal visits Axel in Berlin to finally get to his grandfather. The final act of assassination brings an unexpected twist that may have one wondering which conflict – a family’s haunted past or an assassin’s emotional despair – this film is about.

Though the film should be commended for bringing taboo issues of historical conflicts to the surface, it too quickly glosses over a laundry list of issues between Israel and Germany and characters’ emotions, never seriously delving into any particular one. Also, language changes between Hebrew, Arabic and German are lost in translation that the subtitles fail to note.

The title Walk on Water is a biblical reference to Jesus’ famed act and becomes a metaphor of hope for both Axel and Eyal. This emotional signpost seems a forced element that is unbelievable, much like the Hollywood-style ending that ultimately ties these conflicts up into a simple knot.