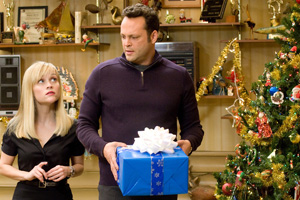 Santa left you something under the tree a little early this year (Wasn’t it just Halloween?). It’s Four Christmases, a holiday comedy about the horrors and joys of family when ‘tis the season produced by and starring Vince Vaughn and Reese Witherspoon, easily two of the most respected comedic actors in Hollywood today.

“We were very much partners on this movie,” Witherspoon says one afternoon at the Four Seasons. “We decided to produce it together, and we rewrote the script together. Every day it was like, ‘How are we going to do this?’ ‘What do we do now?’ I was excited to work with Vince. I think his comedy is renegade, and he always has crazy ideas right in the moment. It’s just always fun to be a part of that energy. I knew it would be original and interesting.”

“Their willingness to get their hands dirty and work with me on the script every single day, [that was surprising],” Christmases’ director Seth Gordon (The King of Kong) says.

“We would meet together and carefully comb through it. By the time we were on set for the first day, I’d heard the script out of their mouths a hundred times or so. The willingness of someone of their expertise and caliber to put that kind of detailed work in was incredibly impressive,” he says, shaking his head in awe. “In retrospect, I’m hardly surprised because you see a track record for both of them in the quality of their material.”

“We worked on it for four months before we ever were on set, every day for five to six hours a day,” Witherspoon says. “We really worked each scene, broke it down, threw scenes away and started over.”

“We had direct contact with every line, either affirming it was what it should be or improving it to what it ended up being,” Gordon says.

Those first months spent pouring over the script and working so closely helped Witherspoon prepare for what to expect on set from Vaughn.

“That gave me a taste of what the improv situation was going to be,” Witherspoon laughs. “[Vince] is so very smart, very funny off the top of his head, the funniest person I’ve ever worked with in my whole entire life. It’s so important when you’re working with that kind of person to create a space where they feel free to do whatever they’re going to do. It was a challenge for me. I had to really keep up with him, and he taught me a lot about improv and ad-libbing. I feel a better actor for that experience.

“Seth’s biggest strength is editing,” she continues. “He knew that he could let us be as free as we wanted to be during shooting because, being a documentarian, he knows how to cut footage. We were really confident he would find the storyline.”

“[Vince] is like a detective of funny,” Gordon explains. “He is a force of nature, an incredible talent and always present in every moment, in every scene, and you never know exactly what the intonation’s going to be or he might think of a different way to phrase something. [Reese] is a force to be reckoned with, a very powerful person. They are so good and so confident in what they do and that naturally made me very comfortable. There were never any power plays, if you will. It was a very collaborative experience.”