School of Seven Bells: Chime to their Own Melody 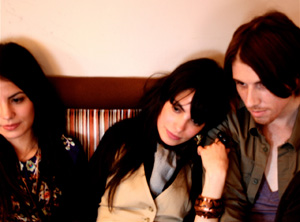 Björk once said she wanted to climb a mountaintop with a radio and good batteries – if she did that today, she would have the School of Seven Bells’ debut, Alpinisms, on repeat for the journey. A combination of mystical mountain climbing (alpinism) and fantastical storytelling, the album is the result of the union between twins Alejandra and Claudia Deheza and Benjamin Curtis, who parted ways with their respective bands, On! Air! Library! and the Secret Machines, to form School of Seven Bells.

Despite the album’s title, it wasn’t an uphill struggle to come together.

“We didn’t really have to think about it – that’s why it feels even more right,” says Claudia. “It’s all been very clear … everything just flowed.”

The Dehezas and Curtis met in 2004 while on tour with Interpol. Unsatisfied with the direction their bands were taking, each wanted more creative freedom.

The idea for School of Seven Bells began to take shape once their ideas and talents coalesced via e-mail. Curtis e-mailed Claudia a piece of music that she decided to write to “just for kicks.” They soon realized the full potential of their musical compatibility.

“They [the Secret Machines] were a great band, but he [Curtis] felt kind of stuck in the rock formula and he wasn’t able to execute a lot of the ideas he wanted to that he can very easily do in School of Seven Bells,” says Claudia. “We just feel a lot more free to throw out ideas. Everyone has the same aesthetic.”

The result is a hazy, electronic-based sound with edgy, space-guitar chords that are built around the Dehezas’ echoing voices. Named after a fabled school of pickpockets in South America, Alejandra conceptualized the band as seven parts of one personality that communicate to one another.

“My sister, the way she likes to write is she sees the School of Seven Bells as seven characters,” explains Claudia. “How she writes is kind of like a dialogue from one character to another character.”

The eerie similarity between twin sisters’ vocals plays into this notion – it’s as if they are one.

“At the same time, we will both write lyrics to the same song, just different parts; but it just all really seems to work,” she says.

The album possesses an intentional picturesque quality. Strong guitars swirl into the drone of texturized synths, instilling a constant, colorful motion within the album that evokes the blurred landscapes outside a moving train’s window. The album has already caught the attention of heavyweights Prefuse 73 and Robin Guthrie, who handpicked two songs off the album to remix.

Not all of the songs are fantasy communications between the fictional Seven Bells, though – some of the band members’ personal reflections also make their way into the album. Claudia had a baby during the recording of this album and wrote “Face to Face in High Places” as a love song to her son. Alejandra wrote the elegant, slow-tempo “For Kalaja Mari” in remembrance of a friend that passed away.

“We’re kind of all the bells – we are all a part of them,” reflects Claudia.