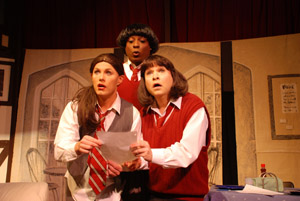 You will laugh out loud at this show! Touted as a “lost episode,” this adult-themed parody of the ’80s sitcom is at times predictable, but at other times politically incorrect in the most insanely funny way.

I’m a fan of parody and a bit of a purest when it comes to the genre. There should be enough of the original subject present to really put it over the top. Most of the characters pull it off.

Brooks Braselman portrays several roles including Natalie, the Headmaster and Cousin Geri. His hysterical performances alone are well worth the cost of admission.