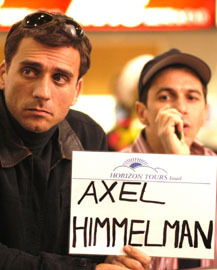 In American film, certain themes are commonly used to propel a story forward: coming-of-age, self-discovery and revenge. In Walk on Water, from director Eytan Fox and starring Lior Ashkenazi, these themes are placed in a context that resonates deeply in Israel – the search for Nazi war criminals.

Walk on Water follows a fierce Mossad agent, Eyal (Ashkenazi), who is on assignment to track down an aging Nazi war criminal by posing as a tour guide. As the trip winds its way from Tel Aviv to Berlin, Eyal becomes friends with the grandchildren of the suspected Nazi and his outlook on the world begins to change. Both Fox and Ashkenazi grew up in Israel – although Fox was born in New York City – and both are familiar with the country’s hunt for war criminals. This is mainly carried out by the Mossad, an intelligence agency that functions similarly to America’s CIA.

“The Mossad in the ’60s caught Eichmann in Argentina. They’re doing all sorts of stuff I can’t talk about,” says Ashkenazi, who met with Mossad agents while researching his role.

“I wanted to see not how they behave when they’re coming back from their missions, but how they communicate with their children, their wives, their neighbors. That’s more interesting to see, not the heroic side, but the daily life,” adds Ashkenazi, who was in New York last week to promote the film’s American release.

Ashkenazi took the role to try and break a stereotype about Israeli men.

“In the movie they’re not talking about their feelings and so they’re kind of the macho guy, not enough crying and all very cool. I think most of us Israeli guys are not like that. We are trying to show another type of Israeli man,” he says.

Fox had the actor in mind when he began writing the script and brought him on board early in the film’s making. Ashkenazi infused the script with lighter touches to temper the drama.

“Actually, in the first draft of the movie there was no humor, so I [talked] to Eytan and I insisted on the humor. I don’t believe in drama as drama,” Ashkenazi says. “I think there is supposed to be humor in anything, any serious thing. We had a lot of discussions about it and we found the middle. Most of the humor in the movie is my part.”

Ashkenazi and Fox became friends five years ago after a project they were supposed to work on together fell through.

“[Fox] was doing a series about young people in Tel Aviv, and I was supposed to go audition and I didn’t appear. He wanted to know why this young chutzpa [didn’t show up],” Ashkenazi says. “He called me and we were in dialogue by phone. Then we met and started to be good friends.”

Military service is compulsory in Israel and Ashkenazi saw his share of combat when he served during the first infada.

“There were no rules; anybody could do anything. It was anarchy over there,” he says.

After starring in Walk on Water, he found it easier to relate his combat experience to others.

“I started to go around to talk shows and did interviews for the newspaper talking about what happened there and telling people to talk about it,” Ashkenazi says.

He says the film’s title, Walk on Water, refers to Jesus’ biblical act.