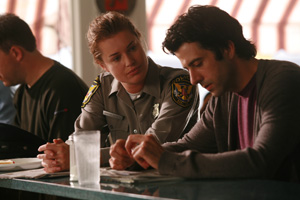 It’s a bummer to see the genius of an actor like Troy Garity wasted on a film like Lake City. While Lake has some decent moments, it’s still just ... eh.

This slow, southern drama about an addict (Garity) who returns to his mother’s home with a son he never knew he had (amid some pretty scary circumstances) boasts a rich cast consisting of Sissy Spacek, Rebecca Romijn, singer Dave Matthews as an angry drug dealer and “The Sopranos” star Drea de Matteo. But that’s about all the bragging it should be doing.

The film drowns itself in an unoriginal and melodramatic plot with novice direction from not one, but two filmmakers.