UCLA Students With a Cause: Coeds aim to make the world a better place. 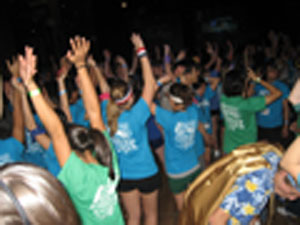 They sell challah bread on campus to raise funds for the victims of the genocide in Sudan. They wear highlighter-colored T-shirts to publicize for a campus-wide fundraising event. They have an emergency response vehicle parked in the plaza to draw attention to the importance of emergency preparedness, and wear posters around their necks calling for a more sustainable way of life.

These UCLA students make up a community of activists, philanthropists and concerned citizens – they are the students with a cause. For many UCLA students, college does not consist of only school, work and play. Marked by their passion and enthusiasm, there is a percentage that spends their time between classes and on weekends brainstorming and working with a student group to make a difference.

Few UCLA students have not heard about the delicious Friday challah bread sales. Through weekly bread baking sessions and sales, UCLA’s Challah for Hunger group raises funds for victims of the genocide in Darfur, Sudan.

“[I’ve realized] how incredible it is that we’re really helping on an issue that’s not getting that much attention,” says the group’s Co-President Lily Stern. “It really rounds out my college experience at UCLA, so it’s not like I’m here just doing work, just being at school. I’m also doing something in the world that’s actually making a difference.”

Challah for Hunger is not limited to Jewish students – challah is a Jewish bread – although the group does try to embody the Jewish phrase “Tikkun olam,” which means “repairing the world.” Stern, who is Jewish, also feels a certain personal connection to the cause considering the genocide of Jews during the Holocaust.

“It’s really about doing something about this huge problem in our world right now,” Stern says. “It’s so important to the Jewish values to help others who are now suffering just the way we were.”

A group that gives back in a much more localized way is Green the Greeks, which aims to educate the Greek community about the sustainable lifestyle, and to implement policy changes within the sororities and fraternities that support sustainability. By building partnerships with the student house managers, the group has already seen results in many of the 30 or so sorority and fraternity houses, including increased recycling bins, timed light switches and composting of food waste.

As the group’s internal Vice President Vincent Phamvan says, the results can be seen in little efforts on the students’ part: Buying reusable shopping bags, turning off the sink when brushing one’s teeth and switching off the lights at night can all benefit the environment in the long run.

“A lot of times, when you’re on campus and you finish a drink you can either throw that in the closest trashcan or you can walk 20 seconds to the closest recycling bin. It’s just getting that into the mindset, and getting to a point where people make those decisions that can make an impact on a larger level,” says Phamvan.

There is also a social aspect to such groups, as they draw together people with common interests.

“It was just really neat to surround myself with other people who had the same green mindset,” says Phamvan. “These [club members] are the people who are going to end up on our alumni list in 20 years for doing something famous, or winning a prize for changing the world. They’re motivated and they’re passionate about what they’re going to do.”

The members of the Red Cross of America club at UCLA are also marked by their passion. The group seeks to prevent, prepare and respond to emergencies through such educational programs as disaster training, first aid, CPR training and blood drives.

Stephanie Be, the President of the UCLA chapter says, “I just hope that when there’s an earthquake or when there’s a small disaster somewhere or if someone has some drunken incident where they cut their foot on a piece of glass they’ll be like, ‘Oh, I remember my first aid training’ or ‘I have this brochure with the number to call.’”

Whether they’re handing out informational brochures, hosting a blood drive (the USC rivalry blood drive began Nov. 24), or educating high school students about earthquake safety, the club has had a busy fall quarter.

While the Red Cross club’s emergency response vehicle parked in the UCLA main plaza at the beginning of the school year did draw attention, perhaps one of the most genius advertising techniques is the infamous Dance Marathon T-shirts, which are worn by the committee members and are so brightly colored one cannot help but look.

Dance Marathon, one of the most publicized events on the UCLA campus, is a 26-hour fundraising event that raises awareness and funds for pediatric aids research and camps for children with and affected by HIV and AIDS. The “dancers” make pledges to raise a set sum of money and then to stand for the 26-hour event. It is the largest student-run philanthropic event west of Mississippi.

“I don’t know what I do without it because it kind of keeps me grounded,” says Victoria Tenney, a member of the event’s planning committee. “Dance Marathon is that part of me that gets to do something for someone else. And I feel like it actually changes something in the world, which is great.”

Service groups are what make the college experience a well-rounded one, Tenney says. There’s school, there’s socializing and then there’s service.

“It was nice to know that even though we’re a great school that has great academics and great sports, but that there’s something more, that you can actually make a difference in the world.”