Ask And You Shall Receive: More Singles Are Looking to Create Gift Registries for Big Events 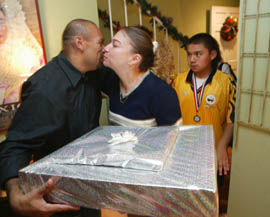 Like many of life’s profound lessons, we learned about it in an episode of "Sex and the City." Sarah Jessica Parker’s character, Carrie Bradshaw, discovers someone pilfered the $485 Manolo Blahniks she was forced to remove upon entering a house for a baby shower.

When her friend shames her for purchasing extravagant shoes, Parker’s character does some math, adding up all the gifts she purchased over the years for that particular friend’s wedding and baby showers.

In the end, all is resolved when Bradshaw announces a marriage to herself, registering at Manolo Blahnik. The pair of heels, a "wedding gift’’ from her friend, is delivered to her doorstep a few days later.

More singles want to celebrate milestones in their own single lives. As a result, unmarried people are creating registries for birthday and housewarming parties.

For some singles, registering isn’t as easy as it might sound. Most say they’d like to register without being mortified when the sales person asks, "So, where is your fiancé?’’ Or, as Bridget Jones would call it, smug married couples who turn their noses up at the notion of picking china patterns without a proposal. Some major retailers have caught on to this trend, making registries "single’’-friendly. Pottery Barn, Williams Sonoma and Bed, Bath and Beyond offer numerous categories for registries, including housewarming, ring ceremony, graduation and birthday parties.

Juan Garcia became familiar with this when deciding to register for his housewarming party.

Garcia, a kindergarten teacher, rented a room for years. After moving into his 1,400-square-foot Long Beach, Calif., condo late last year, he realized he didn’t own any home furnishings. There was no flatware to eat with, no chairs for guests to sit on.

Recognizing the lack of belongings, friends and family persuaded Garcia to register and throw a housewarming party. Garcia did so somewhat reluctantly, opting to combine the housewarming with his birthday to keep from feeling guilty.

"Most salespeople automatically assumed this was for a wedding,’’ Garcia said.

The awkwardness doesn’t register with some retailers.

"Our registry is very popular; we’re very fortunate,’’ said Lisa Ridolfi, a public relations spokeswoman for Crate and Barrel. "We don’t have any plans to change it at this time. We feel right now it provides everything a registry needs.’’

Elizabeth Mendel wanted to register for her 40th birthday last October but, afraid of criticism, let the idea go.

"I think it was a lack of courage, maybe, that kept me from doing it," said Mendel, whose friends are all married or parents. "I would be afraid of people who didn’t get it. (People) will think it’s presumptuous of me.’’

The paralegal thought the different responses from women around her office were telling. Single women laughed. Married women had puzzled looks, she said.

But now, Mendel thinks her graduation from nursing school is the perfect occasion to finally register. After all, she says, it’s a life-changing event, similar to having a baby or getting hitched.

For retailers that don’t cater to singles, Yvonne Santos of Buena Park, Calif., has some ideas.

Santos is approaching her 50th birthday and wants to register, but is wary of the stigma attached. Her thoughts: How about a registry called "Almost 50 and Still Single’’ or "Still Single Housewarming Registry’’?

"I just think that anyone should be able to register for any occasion, not just weddings or for babies or anniversaries,’’ said Santos. "There should be a registry for every occasion.’’