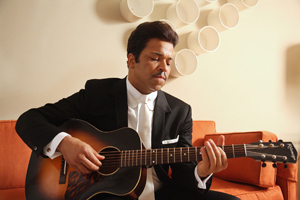 “If Elvis Presley was the king of rock ’n’ roll, then Muddy Waters was the god of rock,” claims Jeffrey Wright, “for he created that musical universe.”

Best known for his compelling character Peoples Hernandez in the remake of the movie Shaft with Samuel L. Jackson, Wright first came to public attention in 1994 when he won a Tony Award for his spellbinding performance as nurse Belize in Tony Kushner’s award-winning Broadway play “Angels in America.” Reprising the role in HBO’s mini series of the play earned him both a Golden Globe and Emmy Award just a few years later, and it’s been nonstop for the talented thespian, whose additional credits include Jonathan Demme’s remake of The Manchurian Candidate, The Invasion with Nicole Kidman and M. Night Shyamalan’s Lady in the Water.

No stranger to biographical characters, he earned an AFI Award in 2002 for his portrayal of Dr. Martin Luther King, Jr. in the movie Boycott and can be credited for introducing audiences to the troubled painter Jean Michel Basquiat whom he also portrayed in 1996. Currently starring in Oliver Stone’s biopic W. as Colin Powell, Wright’s uncanny ability to pick the right projects has earned him a spot as one of the most underrated and underexposed actor of his generation.

“Each role, whether fictional or biographical, has its own challenges, but you try to do justice to the story, and I choose roles for the richness in the part and also relative to how much time it’s going to take me away from home,” claims the Washington, D.C. native who can also be seen as Felix Leiter, the American CIA agent in the James Bond film Quantum of Solace.

A family man married to Carmen Ejogo, a Scottish-Nigerian actress whom he met on the set of Boycott, Wright cites music as being a huge attraction to Cadillac Records, a period piece which follows the rise and fall of the record company that launched the careers of artists Etta James and Chuck Berry.

“The entryway into this character was through the music, for there is a lot of information encoded in the music, so it was finding Muddy’s voice and listening to the way he expresses himself musically,” he says. “What I really adore about the blues is that it’s the language of the black American South and is a language I grew up with because my grandparents were from Southern Virginia and North Carolina. Doing this movie was also a way of introducing my kids to blues because it’s so central to popular contemporary music and is created by folks who were slaves. It’s important that our children remember and celebrate this journey and understand it comes from a very specific place.”

Written and directed by Darnell Martin (Their Eyes Were Watching God) and produced by the film division of record label Sony BMG, Cadillac Records depicts the rise of the Chicago blues and the birth of rock ’n’ roll, and centers around Brody’s character Leonard Chess, an ambitious Polish emigrant who’s anxious to cash in on the burgeoning record label business. With Mos Def as Chuck Berry, Columbus Short as Little Walter, Eamonn Walker as Howlin’ Wolf and Cedric the Entertainer and Gabrielle Union rounding out the cast, the film follows the lives of some of American’s greatest musical legends.