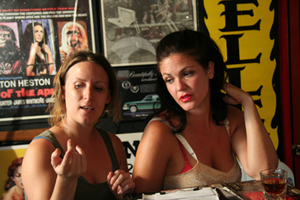 When Rich Hooban and Brad Bores couldn’t get film festivals to take their self-funded road trip flicks seriously, they decided to create an outlet for overlooked, D.I.Y. moviemakers like themselves. Maxing out their credit cards in true independent filmmaker fashion, the two friends started Zero Film Fest – a weeklong, five-venue movie extravaganza showcasing zero-budget projects from local and international artists.

The result is a slew of raw, gritty, truly underground movies created out of the dedication and possible insanity of their crews all compiled into one avant-garde occasion. This year, the festival has an entire week’s worth of daily feature showcases, “experimental” nights, late night horror lineups and – because it wouldn’t be an Eastside event without it – nightly after parties at a warehouse in Downtown with equally-as-independent bands (think Warpaint, RESTAVRANT and the Growlers) playing until last call.

Zero Film Fest doesn’t like pansies with investors and isn’t impressed with B-list actors on the bill. They prefer movies like The Closer She Gets — a voice-over and interview-free account of a woman’s brain cancer battle as shot by her 26-year-old son – and opening night’s premiere, Buster, which brags about its “sub-zero” budget, including developing the ?lm “in the sink using cheap equipment secured from Russia” and extracting the necessary sulfuric acid from old car batteries.

With all the theater-hopping and late-night, music-fueled parties, Zero Film Fest has turned a passion for the unloved and underappreciated into a community-wide event, bringing art lovers and mainstream haters together for six days of independent film fury.