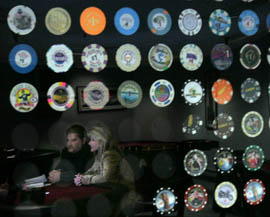 A Macedonia couple has taken a gamble by opening a school to train dealers in such games as poker, blackjack, craps and roulette in a state that doesn’t allow casino gambling.

But Vince Conforte and Cherie Dimmerling said the demand for professionally trained dealers is so high that they already have casinos knocking on their door for graduates, even though the Ohio Gaming College only opened March 4.

The school, which is the first in Ohio, is in a two-room suite in a Macedonia office building off state Route 82.

"We didn’t want to look like a casino in the middle of a neighborhood,’’ said Jo Ann Squillante, the school’s main instructor. "School is a professional place.’’

Conforte said his graduates will be able to work at any casino out of the state, but they’ll also be ready if casino gambling is legalized in Ohio.

The Eastern Shawnee tribe has announced plans to build gambling resorts in four Ohio cities, including Lordstown. However, Ohio Gov. Bob Taft is opposed to expanding gambling in Ohio, and there is a strong church lobby against it. In the 1990s, Ohioans twice rejected ballot issues that would have permitted more gambling in the state.

Conforte said there also is a great demand for dealers for the hundreds of charity and corporate events such as Texas Hold’em tournaments and Las Vegas nights.

However, although charities are allowed to use cash during games, their dealers must volunteer their time. But corporations or sponsored events that hold Vegas nights are allowed to pay dealers because their events do not involve any money.

But the jobs are mostly part time, said John Ferry, president of Gameco Inc., a Parma company that provides casino parties for corporations. Ferry said his employees are not looking to be professional dealers and get their training from his company.

"My people are not qualified to walk out of here and walk into a casino to deal craps,’’ he said.

At the Ohio Gaming School, no money or things of value are used. But the room looks like a casino, with Vegas-quality equipment including a 12-foot-craps table, roulette, blackjack and poker tables as well as a few slot machines.

Greg Corradino has paid $799 for 75 instruction hours to learn how to be a poker dealer. Even though Corradino, 60, has played poker for 45 years, he said he still learned something at his first lesson on Tuesday.

"I just found out tonight that I was supposed to have a silent shuffle,’’ he said, as he practiced shuffling without the cards making any noise. "I thought I was doing it right.’’

Corradino, who is semi-retired, said he was taking classes to learn more about the game and dealing. He might be interested in being a dealer part time.

"If you know the mechanics of dealing, you’ll pick up a lot of the action of the game. You’re watching mistakes and you learn from it – all from the safe seat,’’ he said.

Martin Golembiewski, a mortgage loan officer, is taking classes in craps and Texas Hold’em poker. He wants to learn how to be a better player and explore the possibility of a career change.

"I like to gamble and I like to learn other games as well,’’ said Golembiewski, as he was playing roulette during class on Tuesday night. "Whether I get a job in the industry or not, it’ll be good for me. The opportunity is out there.’’

Students are taught by professionals. Conforte said he was surprised to find so many people with experience who had migrated back to Ohio for one reason or another.

Squillante thought her career as a dealer was over when she decided last fall to return to Ohio to care for her aging parents. The Lakewood woman moved to Las Vegas 20 years ago to become a dealer. After going to school, she worked her way up and was a baccarat dealer at The Venetian in Las Vegas from its opening in 1999 until she left in November.

By coincidence, Squillante said, she saw an ad Conforte placed looking for instructors.

Courses range from $599 to $799 for 75 hours of instruction. Courses can take as little as one month to complete or longer, depending upon the student, said Conforte.

There is no official certification that a dealer needs to have, but Conforte said the school will ensure the graduates it sends for auditions to casinos will be well-versed in dealing and etiquette.

The school also offers classes to people who just want to get better at the game and don’t want to learn to be dealers. For instance, a current special offers two hours of instruction on any game for $25 on Saturdays.

Conforte said when people go to Las Vegas or Windsor, Canada, they "lose money because they don’t know what they’re doing.

"If people are going to spend their money and go out of state, they ought to know what they’re doing,’’ he said.

For information about the Ohio Gaming College, call 866-WE-GAMBLE or go to www.ohiogamingcollege.com