Career for a Bad Economy: Why not be a happy hairdresser? Cosmetology careers thrive in down times. 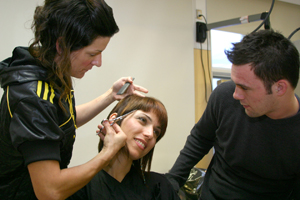 A college degree is no longer a guarantee of a good job – in fact, it’s not a guarantee of a job at all in these uncertain times. High finance, manufacturing, marketing and so many of the other career paths that once looked rosy have gone away, so what’s an ambitious grad to do?

With every cloud bank, there comes a silver lining and these tough times have emphasized a career that has been a constant for years, often maligned in boom times, even though studies show it’s one of the most rewarding professions on earth – and a great choice when the economy turns rough.

Why the happiest workers on earth are a growing field!

Cosmetology has been ranked as one of the happiest careers by a leading British career survey and many economists believe that hairdressing is a recession-proof profession because research reveals that in economic downturns, people cut back on expenses, but not on their hair.

In fact, according to the Daily Mail newspaper, both economists and surveys have found that in tough times, people splurge more on their hair.

US News’ 2008 Best Careers Report added hairdressing/cosmetology to their list of most desirable careers for college grads. According to the new 2008 Green Book (beauty industry) study, there are close to 500,000 salons in the United States – and their most significant challenge is recruiting talented stylists to serve customers.

The US Bureau of Labor Statistics (Occupational Outlook Handbook’s new 2008-09 Edition) predicts that employment for “personal appearance workers” will grow faster than the average for all occupations – and that opportunities for entry level workers will continue to grow!

Hairstylists can prepare for their career and be earning in fewer than two years and there is no limit to what they can earn. Cosmetology school prepares nascent style professionals for an exam (each state administers their own).

Look for a school with a high pass rate on the exam and a good track record placing grads in jobs. Sassoon trains their students in more than just the basics of cut and color – they also prepare them to run their own businesses or even start their own chain of hair salons one day while some cosmetology schools are owned by companies that are only interested in pushing their own products, so it’s important to carefully vet a program before signing on.

Simeon Lee, a UC Davis grad with a degree in managerial economics, chose the Academy for the business background it provided.

“I’m planning to open my own chain of salons,” he says. “And I knew Sassoon was the best place to prepare me for that.”

“Our graduates pass at a rate of about 98 percent,” says Stephen Moody, Executive Director of International Education for Sassoon Academy in Santa Monica, Calif. (often referred to as the “Harvard of Hair”). “On average, our students receive about three excellent job offers right away.”

“We always have lots of college grads,” Moody continues, “but we also have lots of students who opted to switch to a career in cosmetology after a successful career doing something else. They were attracted by the flexible hours, the ability to express themselves creatively and the potential to control their own earnings, since really successful stylists can earn well upwards of six figures. Now, with layoffs so rampant, many, many people are switching to something they know they can count on.”

The Sassoon Academy is located at 321 Santa Monica Blvd., just off the 3rd Street Promenade in Santa Monica. For more information about exciting careers in cosmetology, visit sassoon.com/education or call (888) 751-5100.