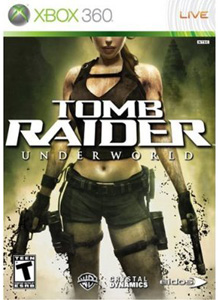 Got a friend who loves the fast-paced run-and-jump action? This holiday season welcomes back two classic characters with a next-gen revamp.

“Prince of Persia” gets a whole new cel-shaded look with a new prince, a new companion and tons of breakneck jumps. If you need more gunplay in your action game, Lara Croft is returning to “Tomb Raider: Underworld.” Younger gamers or fans of the classics may love the new “Sonic Unleashed.”

Honestly, there is pretty much one horse in the race. “Mortal Kombat vs. DC Universe” offers fast-paced fighting action in a unique crossover that gains enough in the upgrade to the next-gen consoles that it makes up for the weak Fatalities.

Let’s face it, even non-gamers love to rock the microphone or wail on a guitar controller. Assuming you’re willing to shell out the cash for a rock game, “Rock Band 2” is probably the best choice this season as you can download your “Rock Band” songs into the sequel. “Guitar Hero: World Tour” does have those cymbals, but all in all, “Rock Band 2” is the more solid game.

Assuming that your RPG-loving buddy is not afraid of a little gunplay, “Fallout 3,” the new first-person reinvention of the top-down classic series is a non-stop treat to play with engrossing storylines and intense action.

Assuming that you have a gamer friend who has been unable to find the cash to feed the WoW addiction, the “World of Warcraft: Wrath of the Lich King” expansion pack is here. Classic RPG fans can rediscover their old favorites remade on the Nintendo DS in “Final Fantasy IV” and “Chrono Trigger.”

If your buddy spends late nights shooting up the online battlefield, then there is enough ammo and gore to go around this holiday season. Xbox 360 owners are all rushing out to get the ultra-gory, sci-fi shooter sequel “Gears of War 2,” while PS3 heads get their own sequel with “Resistance 2.”

If horror is more their speed, they can take on the darkness of space on their own with “Dead Space” or take on countless zombies in “Left 4 Dead.” Traditional soldiers will also have a battleground of their own in “Call of Duty: World at War.”

Sports games are a no-brainer. Just look for EA Sports on the label. While there may occasionally be better titles, they are consistently good. The only exception, of course, is that the only name you need to know in wrestling is “WWE: Smackdown vs. Raw 2009.”

In the realm of the indefinable, the standout from the crowd has to be “LittleBigPlanet.” Aside from being one of the few PS3-only titles to really shine, this quirky sandbox game has both charm and an insane addictive quality.

On a far different level, gamers whose Wii Fit balance boards are just gathering dust may find new life for this quirky peripheral in “Rayman Raving Rabbids: TV Party” where gameplay includes controlling the game with your butt.