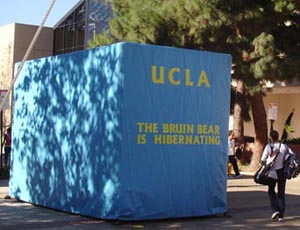 Every year thousands of fans gear up in their cardinal and gold or their baby blue to cheer on their favorite team in the highly anticipated game that pits two teams in one of the greatest rivalries in college football. The crazed fans don’t hold anything back … USC and UCLA both set up a week full of events in preparation for the game.

The last game of the season is always saved for this exciting rivalry and each year the location of the game switches from the Coliseum to the Rose Bowl. This year the Bruins will host the Trojans in arguably the nation’s most famous college football stadium – the Rose Bowl.

In Southern California, it is not the hype for the game that is most exciting, however, it is the tailgating before the game that draws over 90,000 fans to Pasadena. For this, I will give you a step-by-step guide on how to have the best USC-UCLA football game experience.

How to Get Ready for the Game: In the week before the game, there are tons of events going on at both USC and UCLA. First there’s the “Clash of the Cans,” which is a food drive where you can donate food and volunteer time or money that goes to the Los Angeles Regional Food Bank. Each school races during the week to see who can raise more money.

At USC, the week before the game there are numerous events that culminate in Thursday’s CONQUEST 2008. This event, hosted by Mindy Kaling from the hit TV show “The Office,” features USC football players, the world famous Song Girls, fireworks and a Ferris wheel all set up in McCarthy Quad. The headlining band this year is the Gym Class Heroes.

At UCLA, they have “Blue and Gold Week” with events every night such as a car bash, bonfire and performances from a bunch of groups on campus. UCLA also conceals their Bruin Bear mascot in a huge blue box three weeks prior to the game so no crazed USC students attack him.

How to get Tickets for the Game: Tickets for this big football game can be purchased through UCLA’s Central Ticket Office or USC’s Ticket Office. If they’re sold out, you can also check StubHub and other online ticketing Web sites that offer cheaper tickets in bulk. If you can’t manage to get a ticket before the game, you can watch the game at one of the various tailgates that have flat screen televisions right outside the stadium.

Game Day Preparation: When game day rolls around, it’s important to deck yourself out in your team’s colors with jerseys, dresses, T-shirts, shorts, scarves and anything else you can find that overwhelmingly shows your support for your chosen team. Face tattoos and signs are also common at games along with loud chants of either Fight On or U-C-L-A.

Tailgating: The Rose Bowl is quite different than USC’s version of tailgating on campus, but UCLA traditions are unique in their own way. If you have an RV, parking costs $40 and gates open at 7 a.m. on West Drive. Golf course parking for $15 is also available four hours prior to kick off. Most Bruin fans usually arrange their tailgate on the Brookside Parking Lot that holds the most cars, but designated tailgaters arrive as early as 5:30 a.m. on game day to ensure a spot in the front row of the popular Lot H for $15. It is located next to the Fan Zone, FoodZone, and this reserved tailgating area opens 10 hours prior to kick off.

What’s at Stake: The winner of the annual USC-UCLA football game is given yearlong possession of the Victory Bell and the all-sports trophy, the Lexus Gauntlet. The 295-pound bell currently resides in Heritage Hall at USC.

In 2006, UCLA pulled off the impossible upset that ruined USC’s chances of playing in the title game. Last year, higher ranked USC destroyed UCLA 24-7. What’s in store for this year … we will have to wait until Dec. 6 to find out!