Armed And Fabulous: Loveable Sandra Bullock Gets Back to Business in Miss Congeniality 2 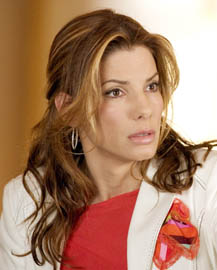 Sandra Bullock is a woman of many talents. An actress since the late 1980s and a producer since the late ’90s, Bullock has had her share of both commercial gems and critical flops. And even though she rode the wave to stardom and success in films like 1994’s action-packed Speed, 1995’s charming While You Were Sleeping and, more recently, 2002’s Two Weeks Notice, there’s one thing hidden in Bullock’s past that people may not know about. According to the actress, all she wanted to be when she was a little girl was rock legend Tina Turner.

"I think I’ve been a Tina Turner fan since I was able to understand what great music was," says Bullock, adding that, even though Turner once sent her a guitar, she’s never met the singer. "I wanted to be Tina Turner and a bass player. People [would] say, ‘What do you want to be when you grow up?’ That was it."

The actress and producer’s love of Turner’s music actually comes to her aid in Miss Congeniality 2: Armed and Fabulous, which was shot almost entirely in Las Vegas and opens in theaters March 24.

In the film, a follow-up to the 2000 smash original, Bullock reprises her role as Gracie Hart – a klutzy, rough-edged FBI agent who, much to her coworkers’ dismay, prefers violence, manly boots and matted hair over posture, politeness and overall cleanliness.

Armed and Fabulous picks up about three weeks after the original ends, with Gracie reeling over a recent breakup and no longer able to do her job as an undercover agent, due in large part to the fact that she’s still ultra-recognizable from the Miss United States pageant.

When an undercover operation that she’s involved in goes awry, Gracie’s superiors decide that it’s time to launch her career in a new direction: If she accepts, she’ll tour the country as the new face of the FBI. Problem is, she’ll have to go back to the land of skin-hugging designer clothing, a polished look and absolutely no violence or swearing.

"Sequels are a disaster," says Bullock, explaining why she and writer Marc Lawrence (who wrote Miss Congeniality and works with Bullock on a regular basis) decided to move ahead with Armed and Fabulous. "We had no intention of making this one … But we finally said, what would have happened to Gracie if the media had caught wind of what she did? She can’t do what she does for a living anymore; she’s now famous.

"That happens to you, when it comes to the [entertainment] business, ’cause all of a sudden it wants to change you – highlight your hair, make you sort of like whatever they consider the star. And what happens to someone when their entire life as they knew it is taken away? So once it came to that, we didn’t speak anymore about the sequel thing. I mean, if you could take away the title and not put a two on it, that’d be great. But you can’t."

And, according to Bullock, she knows a thing or two about sequels. "There are the disaster sequels, and I have been in one," says the actress, who reprised her role of Annie Porter in the 1997 flop Speed 2: Cruise Control. She adds, though, that a sequel is warranted when there’s a genuine need to continue a story about a certain topic.

"I wanted to say something, especially on this subject. I mean, I think it’s really important for anybody who feels like they don’t fit, they’re unique or they don’t belong to the masses," says Bullock, who strolled into the interview at the Four Seasons Hotel in Beverly Hills wearing a fancy, empire-waist, gold-polka dot sleeveless top over a pair of denim jeans.

"I mean, what is normalcy? There’s no such thing. It’s society trying to control us like cattle," she continues. "You just want to say, we can all live together and have different opinions, whether it’s political, religious or what you like to do and eat for breakfast versus somebody else."

She concludes, "It’s sort of saying, why don’t we promote the uniqueness of someone instead of trying to make them normal?"