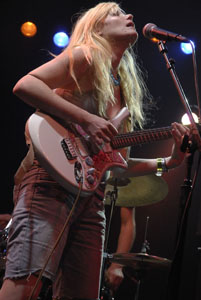 With the release of her second album, This Is It & I Am It & You Are It & So Is That & He Is It & She Is It & It Is it and That Is That, Marnie Stern once again hits the tour circuit. One thing that is clear about Stern, and perhaps can be inferred by the title of her album, is that she is no average, play-by-the-rules musician.

When Stern took the stage the crowd watched with focused intensity. Any fears of a disappointing show dissipated and were replaced with movement from the audience as Stern played on.

Somewhere in the middle of the show a nameless friend joined her onstage while playing air guitar with her pet Maltese. Undoubtedly Stern provided an entertaining and exciting show, even without the magnetic drumming of Zach Hill.