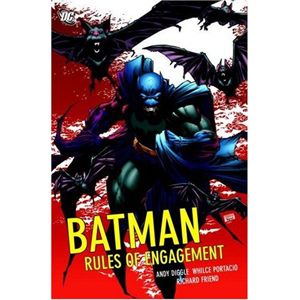 Andy Diggle (Green Arrow: Year One) wrote this arc, originally published in Batman Confidential, the series that focuses on Batman’s first encounters with his greatest enemies.

In this collection, Bruce Wayne competes with Lex Luthor for a defense contract to provide the army with advanced robot soldiers. When Bruce is attacked by one of his own robots, Batman investigates, leading him to suspect Luthor of a hidden agenda.

Diggle’s storytelling is competent but not his best. However, artist Whilce Portacio’s (Wetworks) scratchy, hooded eye style is wildly uneven, sometimes combining great cinematic panels and distractingly poor close-ups in which people look like gargoyles on the same page.

Batman: Rules of Engagement will be available Dec. 16.