The Day The Earth Stood Still: Are you eco-friendly enough to save the planet? 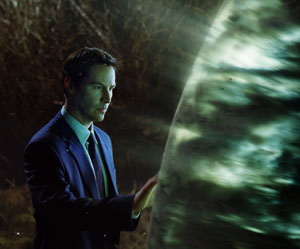 We live in a world where the environment is on its last leg, and everyone is at his or her wit’s end on how to correct the situation. Polar ice caps are melting. Entire species of animals are being eradicated. Landfills are brimming to capacity. The recent gas crisis has nearly destroyed the economies of once-fruitful super powers.

For some, these are new phenomena on their day-to-day radars. But these situations have long been explored throughout Hollywood.

In the much-awaited remake of The Day the Earth Stood Still, Keanu Reeves plays Klaatu. He is neither man nor beast, but an alien from a world far away from Earth who has been dispatched to warn the human race of impending doom and destruction due to our harmful, violent and careless ways.

Klaatu seems uncaring and unwavering in his position on humanity coming to an end. However, he does recognize the good in mankind. But will his sympathy be enough to save life as we know it?

Reeves has fashioned quite the career out of successful science fiction vehicles. He took his first turn at bat in the successful Matrix franchise. His latest foray is a character like none other he’s played.

“I thought, ‘OK, It would be fun to play an alien,’” he remarks of his choice to join the cast. Plus, it was the legacy of the film that moved him as well. The Day the Earth Stood Still first debuted during a time in American history when the masses were contemplating the ramifications of Communism and the Cold War. However, many of its themes are still central to the world we know today.

Filmmaker Scott Derrickson was a huge fan of director Robert Wise’s version of the sci-fi classic. He lists it among his top favorite films of all time. For Derrickson, his need to be a part of this production was a very personal one.

“I think I felt the way most Americans felt [about the environment] – that we’d slipped off track,” he says.

He was pleased by the fact that Fox Studios had a remake set on its radar.

“I loved being able to tell the same story but bringing in those new social issues we have,” he says.

Such changes include the tweaking of key relationships in the film, which originally co-starred screen legend Patricia Neal. Academy Award winner Jennifer Connelly steps into Neal’s role as a beautiful scientist who is employed by the government to stop what at first glance appears to be a life-shattering meteor headed straight for the earth.

Playing her stepson is A-list progeny, Jaden Smith (son of Will Smith and Jada Pinkett-Smith). As Jacob, he steals many of the scenes in which he appears opposite these seasoned actors.

Connelly was thrilled with her young co-star’s acting chops.

“I loved working with Jaden. I think it’s really clear; he has a lot to offer,” she says, beaming.

Still, the more things change, the more they stay the same: back, with a vengeance is the pop culture icon Gort. This fierce symbol of terror from a galaxy far, far away is the real showstopper. He gets a makeover in this current iteration of the classic film and garners applause among audience members who hold an affinity for his presence.

Rounding out the cast are performances from some other familiar faces. Actor Kyle Chandler is perhaps best known for his work as Coach Eric Taylor on NBC’s (now defunct) television adaptation of the hit film “Friday Night Lights.” He portrays John Driscoll, one of the authorities sent to stop Gort with disastrous results.

Actress Kathy Bates is the Secretary of Defense in the movie. And “Mad Men” star Jon Hamm plays Michael Granier – the government official who gathers the world’s greatest scientific minds together to stop the reign of terror that is scheduled to befall planet Earth. Given the critical acclaim of “Mad Men,” Derrickson feels his film struck gold landing the actor relatively early in his rise within the upper echelons of Hollywood.

“If there had been five more episodes on the show, we wouldn’t have been able to afford him,” he jokes.

For Monty Python fans, there’s also a cameo from comedic actor John Cleese who plays Professor Branhardt. In a much talked about scene opposite Reeves’ Klaatu, he shares a funny and well-crafted moment with the star who displayed some serious preparation. “We were thinking about it as a dance as we were filming it,” explains Reeves of the scene in which his character and Cleese’s complete a complex mathematical problem that predicts the doomsday’s arrival.

Both men duke out the scene with precision timing and reap comic rewards in the process. Fox rolled out the red carpet for The Day the Earth Stood Still, giving it the distinction of being the first fully green production released by the studio. Eco-friendly generators were brought in and used, and the entire movie was “paperless” – from its storyboards down to the press kits and materials.

Given the dynamic nature of such measures taken, many have wondered what the stars do in their everyday lives to promote a healthy way of life for Mother Earth. After all, it’s one thing to play concerned; it’s entirely another to practice what one preaches.

For Reeves, the answer is easy. He “recycles” and “has a couple of solar panels” on his residence.

Connelly also employs similar standards in her own personal life. She and husband Paul Bettany recycle and drive a Prius.

The Day the Earth Stood Still releases in theaters Dec. 12.