USC’S ON CAMPUS EVENTS: Wondering what to do? Go underground! 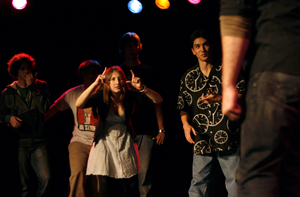 If you ever find yourself looking for a little entertainment, there are plenty of underground shows that would fulfill your needs. Improv and dance groups are abundant at USC and love to have an audience. Take a look at the entertainment these little gems have to offer, plus future show dates.

Commedus Interruptus is USC’s official improv and sketch comedy troupe. They have been performing since 1990. Selection into this improv group is highly sought after and competitive, so you know the best are ready to perform. Performances will guarantee laughs!

Commedus Interruptus performs every Friday at 1 p.m. in front of Bovard Auditorium on Trousdale Parkway. commedus.com

An all-British improv troupe; what’s the catch? None of the members are in the least bit English. They perform “pitch-perfect British comedy for the masses” with short-form English-themed games.
Need another reason to see them? They actually wear the poufy shirts and tights at all of their shows. The Merry Men’s goal is to find a historical event coinciding with each of their performance dates, so they always have something to celebrate.

The Merry Men perform every other Thursday afternoon at the Annenberg Amphitheatre. Check them out on Facebook Groups, keyword: The Merry Men.

An all female improv troupe, MRS Degree are a fairly young group, originating in 2004. However, don’t let that stop you. They’re full of jokes and short forms that will keep you laughing throughout the entire show.

If you let them describe themselves they would respond, “MRS Degree Improv is paving the way for women in comedy one tasteful dick joke at a time.”
MRS Degree performs every other Tuesday at 9:30 p.m. at the Annenberg Amphitheatre. mrsdegreeimprov.bravehost.com/main.html

Second Nature Performs every Friday night at 11 p.m. at Ground Zero Café on USC’s south side of campus. 2nimprov.com

“We dance to say what we can’t speak” is their motto. Boom Kat explores the boundaries of movement and communicates through dancing.
They are inspired by life, music and expression. They channel collaborative choreography into one voice and one message. Boom Kat is truly a communicative vision.

Boom Kat’s 2009 show is currently in rehearsal. Boom Kat’s performances can be found at boomkatdance.org.

USC’s premier hip-hop dance team originally formed as members of the Chinese American Student Association, but are now a dance team that is united by a passion for dancing.
Chaotic 3 performs on the USC campus and surrounding areas. Check them out on Facebook Groups! Keyword: Chaotic 3.

OutRage is USC’s newest urban dance crew. They perform a variety of dance styles: hip-hop, house, vogue, poppin’, wackin’ and all those other terms that I’m unaware of, besides the fact that it looks awesome. They are a must to catch!
Check them out on Facebook Groups! Keyword: OutRage.

Vanguards Crew was once known as the USC Breakers. The Crew is hip-hop dancing – completely freestyle.
They are a b-boy and funk styles crew that performs and battles. Most recently, they performed in October at Stomp the Yard in Hollywood.
Vanguards Crew has sessions Monday and Wednesday at 8 p.m. at Parkside. Special shows are listed on their Facebook Group. Keyword: Vanguards Crew.