Snow Patrol: Have they finally managed to eclipse U2? 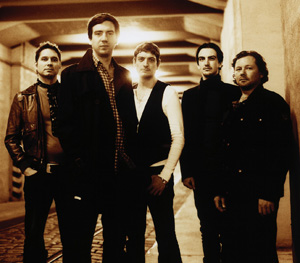 It may have started with U2, but the world’s fascination with Irish powerpop currently resides in the band Snow Patrol. This quintet formed – as most bands do – during the unbridled days at university. Frontman Gary Lightbody and friend Mark McClelland played under the name Polar Bear until 1997 when the group adopted its current moniker.

The years brought many lineup changes. In its infancy, Snow Patrol had such notable floating members as Stuart Murdoch and Richard Colburn from critical and fan favorite, Belle and Sebastian.

2003’s Final Straw was a breakthrough hit for Ireland’s new favorite sons. But you’d never know it based on talking to Snow Patrol’s guitarist.

Connolly’s calm and cool when speaking about his group and the bountiful accolades that have befallen it are nothing short of remarkable. For him, the fame is merely a bi-product of the band’s true love: music.

“We like to think of ourselves as huge music fans. [I] don’t think you should be in a band if you’re not,” he says.

These avid lovers of song have found themselves on the receiving end of some fairly extraordinary opportunities. They have been graced with the distinction of becoming the top-selling British act in 2006. In 2007, Snow Patrol’s single “Signal Fire” appeared on the Spider-Man 3 soundtrack and was featured during the credits in the film.

“We love the movies and getting the opportunity to do a song for something we loved really came out of the blue,” explains Connolly.

Still, it’s not something that they court.

“For us, it’s about the music – always has been,” he continues.

Connolly is quick to dismiss the talk.

“Well, we’re pretty lucky that we don’t get a lot of it,” he explains.

That may be due to Snow Patrol’s mostly low-key interests as musicians. Connolly speaks as an admirer of other singers and songwriters instead of focusing on the parties and perks. Some of his favorite finds over the years have been Canadian group Miracle Fortress and performer Bon Iver.

But even though Snow Patrol is a mellow collective of guys who play from the heart, they continue to enjoy the excitement of their large and still growing fan base. In 2004, the group played one of its first shows (a free in-store performance) in Los Angeles at the now-defunct Tower Records on Sunset. A screaming crowd of onlookers emerged then and have stuck with them ever since.

When asked which fans – American or British – have the most fervor, Connolly laughs.

“I guess Irish crowds are a bit rowdier,” he says. “Generally, they react the same, which is pretty nice.”

Audiences have a lot to gain in sticking with Snow Patrol over the years. Their latest release, A Hundred Million Suns, offers a mature and cultivated sound.

The same fire still burns on tracks like “Take Back the City” and “If There’s a Rocket Tie Me to It.” However, there is much to be said of other offerings such as “The Lightning Strike,” which Connolly lists as one of his favorite songs on the new disc.

Record sales and rabid followers aside, it’s time that will make the determination whether this group of indie rockers turned stadium rockers will have the staying power, massive fame and fortune that U2 has held onto in its nearly 30 years in the industry. Regardless of outcomes, Snow Patrol is in it for the love, taking everything else one day at a time.