Nothing Like The Holidays: An unexpected crisis unites a family 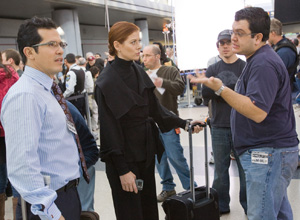 There’s nothing like a good old-fashioned, melodramatic family film in the style of Terms of Endearment to get us into the holiday spirit. With the economy down, retail sales in flux and an ongoing war, what America needs most is a good escape.

Nothing Like the Holidays does just this, as it brings together the Rodriguez clan to celebrate Christmas, complete with secrets revealed, family bonds reconciled and the magic of holiday traditions rediscovered. Director Alfredo De Villa (award-winning Washington Heights) tells the heartwarming story of one unforgettable holiday reunion, sharing memorable, beautiful Puerto Rican “Navidad” traditions, such as cherished “parrandas,” the ritual neighborhood Christmas carols.

An unexpected crisis brings the family together, in loyalty, love and holiday warmth.

Filming took place in the coldest winter that Chicago has seen; the cast endured many outside scene shoots in 25 below zero weather. Also, De Villa called for intense rehearsals in preparation for the film in order to create a realistic family bond and camaraderie among cast members.

Rodriguez, a Chicago native himself, reflects on his work in the film: “There’s a certain power knowing that you can make people happy and move them emotionally. That’s what’s most gratifying to me. If people see it and get their 10 bucks worth, I did my job!”

With such a large ensemble of “big personalities,” all naturally funny people, the film is a laugh a minute, intertwined with deep emotional, dramatic scenes as well. Since people want to escape, laugh and be lifted from their troubles, this movie is like a magic elixir, creating a lot of memories and moments within this particular family, symbolically representing most American families.

Although it’s specifically Puerto Rican culture, customs and traditions portrayed, it holds universal appeal and is more generally a story about Christmas – a pretty hopeful story of family and friends reuniting and bringing out the best in each other.

Rick Najera and Alison Swan (screenwriters) describe the diverse, collaborative pool of talent as analogous to a “stew;” everyone adds a little of their own spice, whether by improv or creative dialogue, and as they stir the pot, conversations and family dynamics build. They hope that people will see the film and recognize themselves and other relatives, similar to the characters on screen.

The film offers a special message (it was filmed “pre-Barack”) that America is getting back to basics; and despite economic and world tension, it’s truly the friends and family and coming home for the holidays, that brings a more hopeful, secure, joyful approach to life.

De Villa states, “Ultimately, it’s about love, friendship and the people who will always stand by us – we crave that.”

It’s a healing movie, and as we are about to embrace a new President and leadership, as we sit around the holiday dinner table and by the tree, we get something from above for inspiration, but also something moving and uplifting from the film Nothing Like the Holidays.