CSS: One more thing Brazil's got going for it 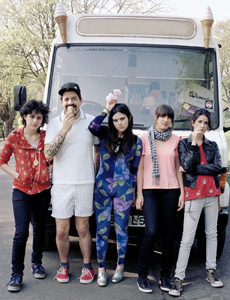 One song likening music to fornication was all it took for the band CSS to blow up. The group – consisting of singer LoveFoxxx, bassist Adriano Cintra, guitarist Luiza Sa and drummer Carol Parra – joined a long roster of acts made famous in spots for advertising trailblazer, Apple Inc. “Music is My Hot, Hot Sex” debuted in a commercial for the iPod Touch device, and the rest, shall we say, is history.

Since then, CSS has played shows all over the world. The band has graced the pages of music and fashion rags like Nylon magazine and has even found a place in the heart of the most fickle temptress of all – the radio station.

For Sa, the fast ride into media players everywhere has been a great, but humbling experience.

“I think it’s easy to feel like it’s worth it and to feel grateful and thankful,” she says, “especially when you get to see people really thankful and really emotional over your show. That’s really rewarding.”

Another perk has been the discovery of and friendships forged with other performers while on the road. Sa names Black Kids, SSION and Lykke Li as favorites.

“We tried to do a tour with Lykke Li, but it never worked out. She’s too busy,” admits Sa.

That’s not the only wish they’ve got stewing on the backburner. CSS is comprised of musicians whose interests surpass the band – branching off into art, fashion and film. They take a very hands-on approach to their work.

“We’re really involved with everything,” explains Sa, a former film and art school student, adding that they’ve even been instrumental in the production of their videos.

So what directors would such a hyper-creative bunch actually trust to push forward its image as a band? They’ve got a short list consisting of former Madonna collaborator Jonas Akerlund and Sofia Coppola. However, one name takes precedence over all others.

“We used to have a joke that we’d write Michel Gondry a letter everyday until he said yes,” she says.

Gondry with CSS for many is a match made in heaven. Unfortunately, it just wasn’t in the stars for the Brazilian quartet.

“I think we tried, but he was making a movie,” says Sa.

Still, as CSS’ current single, “Jager Yoga,” continues to climb the college music charts, enthusiastic listeners will keep their fingers crossed that such partnerships move out of the realm of pontification and onto a television screen one day soon.