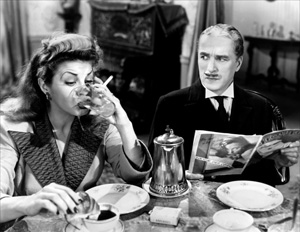 Charlie Chaplin is most often remembered as the Tramp: walking pigeon-toed with a cane, playing with his derby hat and making people laugh with one of the best mime acts of 1914 (the year he made 35 movies). But in a tale of survival unlike any other career in Hollywood, Chaplin made it through the Great Depression with his last two silent films, then played an eerie Hitler (it’s the moustache) in 1940’s The Great Dictator before returning as a grey-haired womanizer with Boris-from-Bullwinkle-inspired facial hair in the “comedy of murders,” Monsieur Verdoux.

With Verdoux, Chaplin is again hilarious, but in a whole new way – with words – and the Nuart Theatre has decided to screen a new 35mm print four times a day through next Thursday.

In his first “talkie” since World War II, Chaplin – as a “dashing debonair lefario” – cons random fur coat-clad Frenchwomen into marrying him before murdering them with arsenic-laden wine and stealing their money. Riddled with black humor that Americans weren’t quite ready for in 1947, Verdoux was a larger hit in the ’60s after its re-release as a cult film with parallels to Kubrick’s Dr. Strangelove or: How I Learned to Stop Worrying and Love the Bomb.

The humor is dark, the end is darker and if you’ve never heard Charlie Chaplin’s voice, it’s best to hear it as he puckers his lips and tells a soon-to-be-dead wife that her diamonds are, actually “glass, you ass.” With hilarious references to the Great Depression and an anti-war moral (what’s a few wives when millions are dying on the Eastern Front?), Monsieur Verdoux is a Chaplin movie that is not to be missed.

So take an amazing look into early talking cinema and laugh at politically incorrect dialogue that would never be allowed today. No excuses – you have all week.