Peaceful Bonaire: The Caribbean’s “B” island gets an “A+” in relaxation. 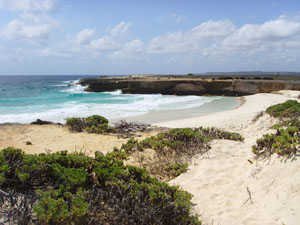 The islands of the Caribbean are great places for non-stop partying. The day’s play usually involves warm seawater while the liquid of choice in the evening is more likely to be a chilly beer or a cocktail made with local rum.

Sure, it’s fun to romp on the beach and through the nightclubs with lots of other people. But if you seek an island adventure that’s a little less manic, all you have to do is remember your ABCs.

Deep in the Southern Caribbean, off the coast of Venezuela and out of the path of hurricanes are Aruba, Bonaire and Curaçao. Collectively known as the Netherlands Antilles or the Dutch Caribbean (their mother country is Holland), the trio is also affectionately nicknamed the ABC islands.

Aruba has long been a playground for spring breakers, while Curaçao is populated with pricey resorts and known for the European-style architecture of its shopping area. You can find these things on Bonaire, too, but the island prides itself on being the quiet one of the bunch.

In an example of great foresight, the government of Bonaire long ago set aside the entire northern end of the island as a nature preserve. In the Washington Slagbaai National Park you can drive, bicycle or hike through a landscape of rolling hills dotted with cactus where inquisitive iguanas are constantly sneaking peeks at their giant visitors. Flamingos in various shades of pink flock to the park’s ponds and salt pans, and while it may seem that they just like to stand there, watch long enough and you’ll see them splashing around like carefree children.

There are a few different routes you can take through the park, but all of them at some point come to the coastline where you can see huge piles of coral that have been washed in by the sea. And here’s the island’s real secret: The park is home to seven secluded beaches and dive spots where you’ll find you won’t have much company, if any.

These are great places to see how the aquatic residents of Bonaire live; the coral reefs are alive with parrotfish, French angels, trumpet fish and seahorses, while a bit further out the water is busy with rays, turtles, squid and dozens of other species. If mingling with the undersea crowd is not your thing, have a park ranger direct you to one of the spots with a nice sandy beach.

Bonaire’s main city is called Kralendijk and this is where the annual Bonaire Heineken Jazz Festival is held. The fest is a weekend-long affair in May that’s held right on the beach at the plush Plaza Resort Hotel.

The festival showcases regional musicians like singer Izaline Calister of Curaçao, Pablo Gil and Empatia from Venezuela and the boisterous homegrown group the Foyan Boyz. The price of admission is inexpensive, and a good portion of Kralendijk’s citizenry comes out to dance barefoot in the sand or just listen while sipping a cool drink. The festival moves to the Divi Flamingo Resort for its final day, wrapping up with an informal jazz brunch jam session held just off the beach.

If you like to learn a little about the culture of the places you visit, Bonaire is the island for you. It is small and very welcoming and you can’t help but interact with the friendly locals.

The shopping, resort and nightlife area of Kralendijk are easy to navigate, but you’ll be amply rewarded if you explore beyond the city limits. Most of the roads outside of the city have no names, so you’ll need to ask for directions to find a place like Maiky’s. The quaint roadside eatery doesn’t advertise and can’t be found on any tourist maps, but if you want to have a hearty lunch of a local favorite like roast goat, seek out Maiky’s.

And yes, if you really do want to party, you’ll have no trouble doing that in Bonaire. But if you’d rather relax, you’ll find the Caribbean’s “B” island is really an “A” – as in “aaah!”