Butane: Slows Down for No One 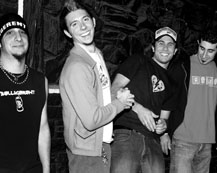 Confidence: it measures one’s ability to get the job done. It sets the tone for greatness to follow and without it, success is failure.

It is also one thing that punk band Butane isn’t lacking. In fact, while still a young band by industry standards, Butane displays more confidence in their independence than a lot of signed bands that enjoy the relative safety that comes with being under the umbrella of a major label.

And to what can you attribute their tenacity?

"We get shit promised to us constantly," drummer Ted Barakat states. "Bands like Pennywise, Social Distortion, Rancid and The Transplants – if they can do it on their own, then why can’t we?"

So let’s see, with an independently produced first album already on their permanent record, a recently completed music video, songs featured on "Bands Reunited," "Date My Mom" and the ever popular "Pimp My Ride," is it any wonder that Los Angeles-based Butane exudes determination? After all they’ve accomplished, isn’t now the time for some quiet reflection?

The answer is, not in a million years. Still high off a successful show at the infamous Viper Room, the tireless, four-member band has set its sights on producing a sophomore album primed to blow their previous effort out of the water. And where the first album took a shotgun approach, hitting listeners from all sides with issues ranging from fame seeking to school violence to eating light bulbs, the second album is pure precision. They’ve even found room for a jazz-punk hybrid.

"I feel the new album is more directed, like we have strength now," says Barakat as he reflects on the band’s two years’ worth of growth. "It’s different, it’s definitely different. But the way we play together now, our influences, our intricacies, our quirks – it’s total departure, yet it’s exactly us … I have strength, watch me take over the world."

But one thing about Butane’s future plans that the band will never admit to is that it’s going to be easy. Among the experiences they’ve already survived, you can add to the list a bassist change for the better and, more recently, an event that can only be described as "jaw breaking."

"There are pitfalls," notes guitarist Carmine Electric as he kicks back and bums a cigarette. "There are ups and downs. It goes with it, and you just take it in stride. It either tears you apart as a band or just fucking builds you up."

For those unfamiliar with the rapid-fire delivery of Butane, be forewarned. Check your sorrows and your post-’90s whinefest at the door. This is a band that puts high energy, lightning riffs and heavy beats at the top of their list for every gig and, above all else, wants you to have a good time.

"In the ’80s, everybody was happy. All the glam … [everyone was] having a good time," says Electric. "In the ’90s, [it was] ‘I hate my parents, I’m wearing black.’ It’s time for everybody to be happy again; nobody wants to be sad. There’s too much crap going on."

For their style, Butane gives plenty of credit to influences that span two-decades. Having grown up in rural Minnesota on a steady diet of ’90s punk, frontman Danny Saxton gives props to the likes of Tim Armstrong and Rancid as being at the forefront of any inspiration. In Saxton’s experience, it served as enough motivation to prompt one small town kid to drop everything and relocate to Los Angeles.

"You’ve got to have someone you believe in. Something you’re loyal to." He goes on to add, "I think people believe in us."

Add to the mix ’80s metal-loving Electric – whom Saxton describes in a moment of mischievous reflection as a "whoopee cushion of riffs" – and you have two differing styles that collide, bounce and play off each other like a Ritalin-infused odd couple.

Bridging the gap between the two worlds falls to drummer Barakat who, like the others, gravitates toward Butane after a variety of other projects dissolved. But the lineup wasn’t complete until the addition of the band’s own Renaissance man, bassist Gabe Heredia.

So with the members in place, the band back in the studio and a busy concert season on the horizon, can we expect a Butane slow down? Not any time soon. With a growing buzz in the industry and a fan base that doubles with each succeeding show, the band is hell-bent on making 2005 "The Year of the Flame." And with a roll of his eyes and a flick of his cigarette, Electric admits, "You can quote Teddy on that."