What Doesn't Kill You: “Crime doesn’t pay, rehabilitation is the way.” 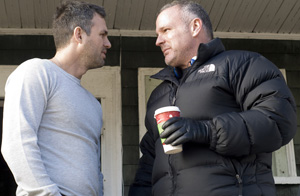 Hollywood loves a good comeback story, and in What Doesn’t Kill You, Mark Ruffalo’s performance as Brian is indeed a display of a remarkable comeback. Based on true incidents in director Brian Goodman’s own journey, the film shows how he miraculously turned his life around after a tough, grueling time as a youth on the streets of South Boston, heavily involved in crime, cocaine and corruption.

Ruffalo was instantly sold on the script “about the rise out of poverty and hard tough luck circumstances – a story we don’t see often,” he says. The actor met Goodman on the set of The Last Castle, starring Robert Redford, and was drawn to him; how he approached What Doesn’t Kill You as he approached his whole life – with conviction, determination and persistence.

Goodman had a lifelong dream of becoming an actor. Though crime, jail and drugs derailed his career path, he held tight to his dreams and ambition.

This film is his professional and personal redemption. Through passion and humility, he was able to attract a star-studded cast, including Ruffalo, Ethan Hawke (playing his best friend and partner in crime, Paulie) and Amanda Peet (his loyal wife and soulmate, Stacey).

When Ruffalo received the script seven years ago, he immediately sensed Goodman’s intensity and seriousness: “He looked me in the eyes and said, ‘I have a script for you to look at.’ Unbeknownst to us, the next seven years we became dear friends, and it was a time of preparation. I got to know him on a deeper level, his mannerisms and the way he sees the world.”

Ruffalo understood the pain Goodman felt (“You either are an addict or know and love one!”), and empathized with his longing to be a loyal husband, and mainly a good father to his two boys. But somehow all he knew was crime on the streets. Nothing in the world compares to the connection and bond a father feels to his kids, and this yearning and guilt kept Goodman motivated, clean and sober, while serving time in prison, refusing to let his kids down in the future.

A redeeming piece of this story is that Goodman cast his own sons (now young adults) in cameo roles.

Goodman himself plays the role of Pat Kelly, organized crime boss (fulfilling his dream of acting on screen), in addition to directing. He is a true Hollywood success story, yet he maintains his soft-spokenness and humility to this day.

During his parole and recovery, while attending AA meetings, he gathered material for his story. He first wrote the script in a 37 cents notebook.

Goodman hopes his film will send a message of hope as a “redemption story, showing crime doesn’t pay, rehabilitation is the way.”

Profoundly grateful for his completed work (which he also found to be a very therapeutic process), Goodman states, “I only hope other directors can have half the ride I’ve had!”

What Doesn’t Kill You releases in select theaters Dec. 12.