Wendy and Lucy: A Girl, Her Dog and Our Economy 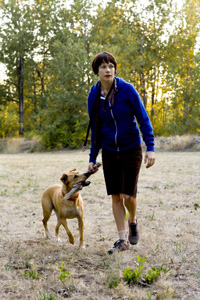 When it comes to working in Hollywood, people say that it’s all about whom you know, even if you’re an established talent like Michelle Williams. It’s how she came to be a part of Kelly Reichardt’s Wendy and Lucy.

“It came through a mutual friend of ours, Todd Haynes, who I had worked with and had a really good experience being directed by,” Williams recalls. “It first came to me in short story form with a little letter saying, ‘This is a dear friend. Think you guys would get along.’”

“I’m a reader,” Williams explains. “I like to read books, and it really captured – there was so many things in it, so many qualities in the writing, the descriptive language. It was a really natural decision. I just called my agent one day and said I’m going to Portland. I’ll be there for the month of August.”

This timely look at the pressures of a failing economy is imbued with classic cinéma vérité, so it’s no surprise to hear director Kelly Reichardt’s influences are founded in classic cinema.

“A lot of the Italian neo-realism, it seemed like a really good time to go back and revisit. There’s also some new German cinema, like some [Rainer Werner] Fassbinder, that I went back to. All those themes – the social issues – seemed really relevant for the moment. The kids in the beginning of the film … who really live off the grid all over America, they have a community amongst themselves. It’s a total throwback, even aesthetically, seeing these kids. It’s so Depression Era.

Wendy and Lucy is a powerful film, bolstered by Williams’ moving performance and deftly guided by Reichardt’s direction, something worth seeing during hard times.