Timecrimes: The Sinister and the Silly 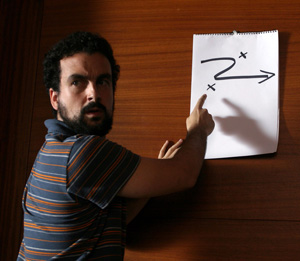 There are many films about time travel, though nothing quite like Timecrimes, the feature-length debut of Oscar-nominated director Nacho Vigalondo. It’s no surprise to learn that the genesis of the story came from a diverse taste in pop culture.

“It comes from my love of time travel paradoxes in science fiction stories. I’ve been reading science fiction for all my life,” Vigalondo says. “I love the work of authors like Philip K. Dick or Alfred Bester.”

But a love of sci-fi takes a backseat to Vigalondo’s sense of humor.

With such diverse influences, Vigalondo keeps his inspirations in check.

“When you are writing you try to make your influence live through you, but when I was shooting the script I had Psycho in my laptop,” he laughs. “I didn’t want to make this open homage to another film, but there are some parts in that movie, for example, the sequence where Norman Bates takes the corpse of the girl from the bath to the car. That part of the movie for me is pure magic. It’s my favorite part of the film. Not the killer shot, the killing in the shower – I love that, obviously – but what comes immediately after. I love that.”

For Vigalondo, the desired effect is not to pulverize an audience with suspense but to have fun.

“I like, in Hitchcock films, that things are sinister and silly at the same time. You can laugh at the movie, at the same time you feel so afraid of what’s happening,” he says.

Vigalondo’s film is full of twists and turns and genuine surprises, but if you’ve seen the American trailer for Timecrimes, then you know that some of those surprises are divulged. Vigalondo approaches the subject in a practical and characteristically humorous light.

“In my Web page, I put up the American trailer and asked people what they thought about this. Half of the people liked it, the other half didn’t like it,” he shrugs.

“In this case, I started as a filmmaker so worried about the trailer, but there comes a point where you just surrender and you are thinking about your next film,” he laughs.

“Maybe it is a new kind of trailer,” he jokes, “a trailer to be seen after the film. Post-trailer.”

For all of Vigalondo’s infectious humor, he isn’t anything other than serious when it comes time to talk about writing the very intricate – and very complicated – screenplay.

“I knew from the beginning that my budget wasn’t going to be great. I knew that my special effect, my big special effect, would be the script itself. In this kind of story you have to write from the left to the right and once you reach the end you have to go back to the beginning because something at the end changed – it was a living hell, writing this script because every minor detail could affect another 70 things in the story. It was really funny to make this kind of puzzle, but at the same time it was a nightmare,” he shares.

Audiences should be thankful for this particular nightmare, a masterful piece of sinister and silly genre filmmaking.