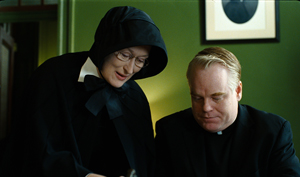 What is the opposite of doubt? Is it certainty? Belief? Or is it hope?

When John Patrick Shanley decided to bring “Doubt,” his Pulitzer Prize and Tony Award-winning play, to the screen as both the film’s director and writer, he tackled the project – which he called “the hardest script I ever wrote” – with a tremendous amount of love, trust and belief that the adaptation could soar as the stage productions had.

The most important element to conducting the film’s emotional symphony for Shanley was to ensure “the sense of doubt belongs to the audience. I’m not going to tell them if they’re right or wrong.” The only people who knew whether there had been a dalliance between Father Flynn and Donald were Hoffman and Shanley, though neither is willing to reveal the truth.

“I would never tell anybody,” Hoffman insists. “I think it’s important that there’s always something to keep you guessing. If anyone knew what I thought, it would ruin the whole thing.”

Doubt’s dance of uncertainty colors everything about the film for both the audience and the actors involved.

“I’m so glad [I don’t know],” says Amy Adams who plays Sister James, the plucky, hopeful, fence-straddler stuck between Sister Aloysius’ biting suspicion and Father Flynn’s well meaning hopefulness. “I would have had to play the whole thing hiding my knowledge. I’ve watched it thinking, ‘OK, he’s not guilty,’ and I’ve watched it thinking, ‘He is,’ and it is a different film! When you watch it, I challenge you to watch it unbiased and then come at it from one direction and then the other.”

The delicate balance Shanley had to cultivate was made both easier and more difficult on screen since he had the luxury of film’s multiple takes, yet he had to put everything under a more intense microscope than the theatrical experience demanded. Luckily, he was working with tremendously talented actors.

“For someone who wrote this play and saw every production, he’s remarkably unjealous of the territory of the characters,” Streep reveals. “He would often fling out an arm and say, ‘I NEVER thought of THAT! Do that!’”